The Legacy of Mar-Vell! (Part 13 of the Blog History of ALL Captain Marvels!)

When last we left the heroic name of Captain Marvel it was being used by Monica Rambeau in Marvel Comics and Roy Thomas' re-interpretation of the World's Mightiest Mortal in DC Comics. But all things (good, bad, and indifferent) must change or die, and in the early 1990's, that's what happened.

Monica Rambeau, last we saw, had lost her powers and nearly died in an incident on the ocean. She lost her status as leader of the Avengers (mentally manipulated by Dr. Druid), but recovered and with her recovery, developed a set of powers subtly different from what she'd had before.

However, she was no longer a regular member of the Avengers, so her fans did not have a regular place to see her. She was kept on the team's "reserve" roster, and often helped  them on adventures cosmic in scope and scale. In such cases her ability to fly at light speed helped.

There were two eponymous "one-shot" issues at the beginning of the next decade in which she was featured. One of them was about racial prejudice, making it the first time that the fact the the hero was black was ever a plot point. 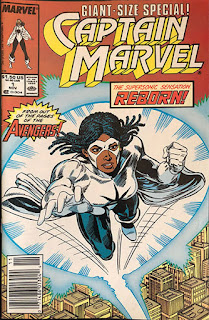 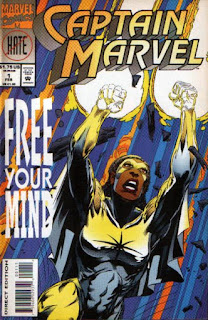 Then came the collector's boom and Image Comics. 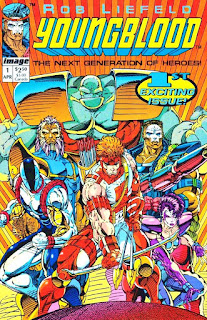 Marvel Comics began the policy of always listing the staff that created a comic book in the 1960's. Fans started following artists and writers and buying comics because their favorites were involved. In time, certain artists became so popular that collectors were buying prodigious quantities of comics. By this time also, the mainstream had heard that old comics were worth a lot of money, so many people began buying comics as an investment. At the same time as all this, some of these artists did not like the fact that characters that they had created were the property of the company for which they were working. A consortium of these artists left Marvel Comics and formed their own company, Image Comics, which became incredibly popular. Demand for these comics both because of the popularity of the artists and as an investment, inflated the market and comic book shops were opening up all over the place.


The next thing you knew, new comic book companies were starting and comic book shops, trying to keep up with demand for anything new and "collectible," stocked their shelves with everything. In response, Marvel and DC flooded the market with new titles and had big "events" to maintain their market share and relevance.

So here is the relevance of all this to Captain Marvel:

One of the big "events," was in the summer of 1993, when Marvel decided to introduce a brand new character in the "Annual" issue of every single non-reprint title they had. The only one of these characters that managed to have his own series for any length of time was Marvel's next Captain Marvel, Genis-Vell. He was not called Captain Marvel at first. He was called "Legacy" and first appeared in Silver Surfer Annual #6. 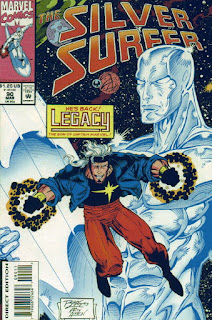 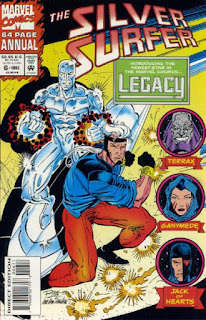 He later appeared in another issue of Silver Surfer, and in 1994 was featured in the Cosmic Powers miniseries (in which he tried to kill Nitro, the villain who killed his father). 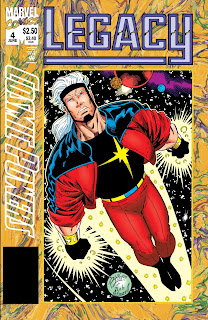 He got his own series titled Captain Marvel in 1995, but it was cancelled after only six of a planned 12 issues, before the story in it was even finished. He still went by the name "Legacy," but Rick Jones had him on his talk show and insisted in calling him "Captain Marvel," There was an implication that Monica Rambeau was not pleased by this, but they only showed her from behind, in shadow, and referred to her as a caller to the show named "M. Rambeau." 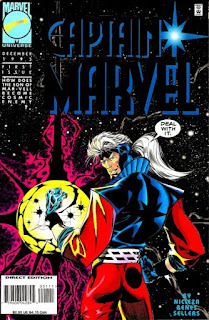 This issue of the character's second series completes the story that was not finished when his first series was cancelled.

The cancellation of the series may have been a result of the collapse of the speculator's market after the 1993 Death of Superman saga at DC (of which more will be spoke in the next chapter) was literally the incident that had people buying comics like they were going out of style. The issue in which Superman died sold out completely on its first day, and there were reports of it being sold as high as $75 in on particular county in Pennsylvania. People continued to buy the following issues that introduced four new potential Supermen, and even when he returned, collectors still clamored for copies. But many of these people did not read the comics and cared not for the characters, stories, or art. In time, some of these collectors would try to sell the comics, only to find that everyone already had them, so no one wanted them. 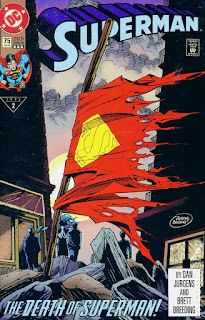 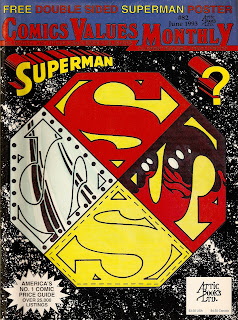 Thus did the bottom fall out of the market. Titles were cancelled. Comic companies shut down. Marvel, who had gone public a few years before, declared bankruptcy. Many comic book shops closed. To hang on to what market was left, both Marvel and DC attempted to create company-wide "events" to drive sales.

It was during this period of collapse that in Avengers Unplugged #5, Monica and Genis had an adventure together, battling the Collector (who, of course, had fought Mar-Vell in years past). In the end, Monica declared that Genis was living up to his father's legacy and should take the mantle of Captain Marvel. She would then call herself "Photon!" 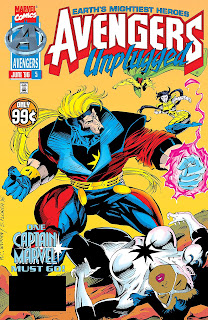 Genis appeared in a couple of other mini-series, most notably Avengers Forever (12 issues, Nov 1998- Nov 1999). In that story, it was a version of himself from the near future who appeared. He was married to the reformed super villain-turned-superhero Songbird. By then end of the story he also became attached to Rick Jones in the same atom-switching arrangement with the nega-bands that his father had had, swapping places between Earth and the Negative Zone (which was later revealed to really be the Microverse, the home of the Micronauts). 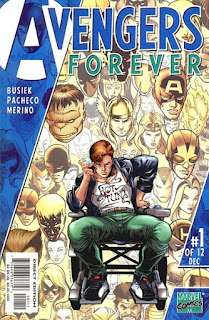 That series was also significant in Captain Marvel history for a sequence in which alternate-universe/history Avengers, both good and bad, fought each other, revealing several Captain Marvels and their variants.

In 1999, Genis got his own series again. Written mostly by Peter David the through-line was Rick and Genis having an uneasy relationship as Rick tried to teach him how to adapt to Earth culture and Genis trying to be a superhero. Genis' look had changed at the end of Avengers Forever into the new look he bore in this series. 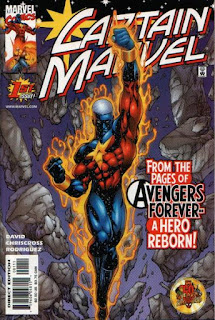 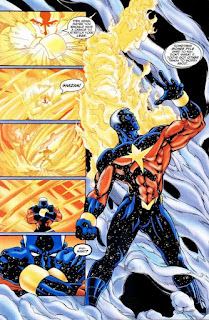 The balance of this dynamic was altered when Genis realized that he was omnipotent, but unlike Mar-Vell, he could neither turn his "cosmic awareness" off, nor did he have the maturity to handle it.

The title carried on with very good stories and art, but was not a top-tier seller. In a big "event" move. Marvel released three new titles, and re-started this Captain Marvel with a new "First Issue." A challenge was made that the title with the best sales would continue and the others would be cancelled. Captain Marvel won handily. However, each issue would show both the number it was from the new "first issue," and the original "first issue." 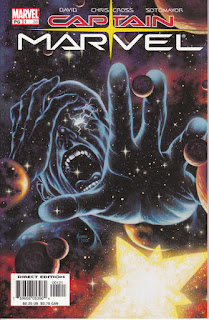 Let us now take a break from this Captain Marvel and look at what was happening over at at DC (POWERFUL STUFF)...
Posted by Captain Zorikh at 8:19 AM