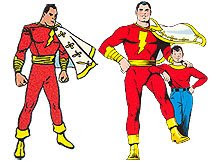 Immediately Captain Marvel and Whiz Comics became a success. It is not hard to see the attraction Captain Marvel may have had to young boys. He was, in his alternate identity, a young boy. This boy was a resourceful, adventurous kid, who could handle himself in tough situations, but when faced with a challenge that was greater than a normal man could handle, he could change into a grown man, a mighty hero, by simply saying a magic word. As more than one historian has commented, this was total wish fulfillment. It may have been more difficult for young boys to identify with a grown man who was an alien from outer space.

Further, while the early adventures of Superman were tales of social justice, and laced with the sexual tension of the Superman/Lois Lane/Clark Kent triangle, the adventures of Captain Marvel had it's heroes (Billy Batson and the Captain) battling absurd, almost comedic plots to conquer the world, with little or none of the embarrassing awkwardness of a Clark Kent/Lois Lane exchange. In fact aside from Captain Marvel being particularly shy around women, the whole romance angle was conspicuously absent.

Captain Marvel's primary adversary was Dr. Sivana, a bald scientist who was struggling to rule the world and ultimately gain the crown he believed he deserved, that of the “Rightful Ruler of the Universe.” His look was inspired by C.C. Beck's childhood pharmacist. This was one of the most tenacious and entertaining villains in history.

Shortly after Captain Marvel first appeared, the US entered WWII. Bill Parker went into the service, and never returned to comics. After a while Otto Oscar Binder, an already successful writer of science fiction famous for, among other things, the original “I, Robot” stories, got a job writing for Fawcett's comics. He got the Captain Marvel job and ultimately wrote more than half the Captain Marvel and related character stories published by Fawcett. His writing style established the sense of “whimsy” that so many historians have described Captain Marvel's stories to have. After the end of Fawcett Comics, he went on to write for DC, adding a similar sense of humor to many Superman-related stories, and creating characters like Supergirl.

Next: The Blue Boy
Posted by Captain Zorikh at 9:28 PM No comments:

Comic books at this time were still mostly anthologies with several stories of different characters. The first Fawcett comic book would be no different in this regard. The lead feature would be the costumed super hero of Fawcett's concept. Daigh selected Bill Parker, a supervising editor of Fawcett's movie magazines, to be the editor and develop the material that would fill this new comic book. He wound up writing every story and creating all its characters. Charles Clarence Beck, a staff artist and cartoonist at Fawcett, was assigned to be the artist for this new superhero Roscoe Fawcett wanted

Parker's original concept for the super hero lead feature was to be a team of a half-dozen heroes, led by a Captain Thunder. This captain and his lieutenants would each have a different power, such as strength, speed, wisdom, etc., which they would use to fight evil. This would have been the first super hero team in comics, coming before the Justice Society of America and even before Batman had his sidekick, Robin. This idea was dropped, though; in favor of one hero who would have the powers of several ancient gods and heroes granted to him by a bolt of lightning and his name would be "Captain Thunder!"

The hero himself had to go through a name change, though. At the last minute, the name “Thunder” was rejected, and artist Pete Costanza suggested the name “Marvelous,” which was shortened to “Marvel.”

The original Captain Marvel appeared in Whiz Comics #2 (most historians credit the ashcan as being #1) in 1940. In the story, young orphan newsboy Billy Batson was invited into an abandoned subway station by a mysterious figure in a dark hat and trench coat. The stranger took him to meet and old wizard named Shazam. The wizard introduced himself as one who had used the powers of a half-dozen ancient heroes to battle evil for thousands of years. His name was a acronym of those heroes:

Shazam told Billy to speak his name. When he did so he was transformed into Captain Marvel, a tall, muscular fellow in a red suit with a strong resemblance to Fred MacMurray (artist Beck's idea).

Next: Captain Marvel: The Early Days
Posted by Captain Zorikh at 1:37 PM No comments:

Pre History: The Captain and the Major

This is the first in a series of twice-weekly posting I will be making to this blog, synopsizing the history of the many Captain Marvels as I see it. This is the groundwork for the forthcoming book "Captain Marvel Culture." For more details, go to http://www.captainmarvelculture.com

Magazines, regular periodical publications containing brief, self-contained articles, had been around since before the American Revolution. The advent of regular passenger train service in the 19th century gave the magazine industry a big boost as passengers sought reading material that was portable, of moderate length, and disposable. By the first half of the 20th century, one genre of magazine that had developed a particularly strong following was the pulps. Pulps were magazines that were generally printed on cheap paper and contained short stories , mostly of adventures that appealed to men and adolescents.

Comics, cartoons, and sequential art, illustrations that told stories, had been around, in various forms, since Ug the Caveman took a burnt stick to the cave wall. Combining these illustrations and sequential images with words has been done almost as long as there have been alphabets. Egyptian hieroglyphs, the Bayeux Tapestry, and 18th century broadside cartoons all are examples of this. At the end of the 19th century, comedic comic strips became a regular feature of newspapers. In the early 20th century various types of collections of comic strips, sometimes called “comic books” had been released. In the mid 1930's reprints of newspaper strips had found success as premium giveaways, until in 1934 a publisher named Max C. Gaines got the idea of putting out a collection of newspaper strip reprints with a 10-cent price tag and left them on a few newsstands. They sold out over the weekend. For a couple of years several publishers, many of whom had been in the pulp business, began regular publication of newspaper reprints. One new publisher, Major Malcolm Wheeler-Nicholson, a colorful character who had a successful career writing adventure stories in the pulps, used his connections to put together the first comic book of all-original material with advertisements, Detective Comics #1.

While this was happening, two young Jewish science-fiction fans, writer Jerry Siegel and artist Joe Shuster, were desperately trying to make a splash in the comic strip industry with their science-fiction creation, Superman. After several years of rejections and failures, Major Malcolm Wheeler-Nicholson's company gave them a break, making their character the lead feature in a new comic book, Action Comics in 1938. Thus was the first comic book superhero brought into the world, and the comic book industry never looked back.

The popularity of Superman grew faster than anything else in the publishing industry. It opened the floodgates to a myriad of masked adventurers and imitation superheroes.

Meanwhile, back in the magazine industry, Fawcett Publications took notice. Fawcett was company founded by Captain Wilford H. “Billy” Fawcett. He had fought in the trenches of WWI, and when he returned home, began a pamphlet of jokes and patriotic writings which he distributed to veteran's hospitals. The pamphlet proved to be a success on newsstands and soon became a popular magazine for the flaming youth of the Roaring '20's. A congenial networker and tireless businessman, “Captain Billy” parlayed the success of this magazine, “Captain Billy's Whiz Bang,” into a publishing empire, with titles in almost every magazine genre imaginable. A family man, he brought his children up in the businesses. One of his sons, Roscoe K. Fawcett, noticed the sales of comic books and thought that Fawcett Publications should enter that arena as well.

Roscoe Fawcett tapped art director Al Allard and editorial director Ralph Daigh to head the project. Citing surveys that said that the biggest market for comic books was 10 to 12 year old boys, he said "give me a Superman, only have his other identity be a 10- to 12-year-old-boy rather than a grown man"
Posted by Captain Zorikh at 4:07 PM 1 comment:

An-G of the Nursery.net gives Captain Marvel Culture some publicity outside the Big Apple Convention!

Posted by Captain Zorikh at 2:09 PM No comments:

It starts with SHAZAM!

If you have no idea what I am talking about, then go to http://www.captainmarvelculture.com
Posted by Captain Zorikh at 3:27 PM No comments: