I was finally able to get to Dan Didio at New York Comic Con after his discussion panel and ask him a few quick questions about the name of the superhero who says "Shazam!"...
Posted by Captain Zorikh at 4:47 AM No comments: 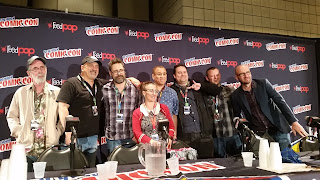 When last we left our story, I was at a panel discussion with Dan Didio and some DC artists and writers and he was asking questions of the audience and panelists. One of them was a very interesting question to which I had what I thought was a brilliant, insightful answer, and even had relevance to the ostensible reason for me being there:

“Who was the first artist you started following and did you start following comics for the character or the artist?”

Funny thing about that…

Of course, growing up, I saw Archie and Casper the Friendly Ghost comics and superhero comics, and I was aware that the art was different for Archie and Casper than it was for Batman. However, the first time I actually noticed a specific artist’s art as being distinctive of of other artists was when I saw the original Captain Marvel.

Though I was not yet sophisticated enough to tell the difference between C.C. Beck and Kurt Schaffenberger, I did realize that the Big Red Cheese, in both reprints of old stories from Fawcett Publications and the contemporary stuff from DC, was not like what I saw in Batman, Superman, Spider-Man, and other superhero comics (which was what most of my other comics were).  It was simpler, clearer. One might say it was more “cartoony,” but the simplicity disguised the mastery of the medium that Beck and Schaffenberger had. The storytelling was always clean and concise. The anatomy was proportionate and believable.

However, in 1981, DC decided to give Captain Marvel a makeover. Out went that simple style of Kurt Schaffenberger (who was drawing the hero at the time) and in came the slightly warped but realistically detailed work of Don Newton. I actually avoided reading those stories in Action Comics because I did not like seeing that art for Captain Marvel. I spent hours trying to think of which artists would be able to draw the World’s Mightiest Mortal in the appropriate style, and did not understand that calling for such a change back was a lost cause. DC wanted to update the look, and there it was.

Now, of course, I recognize the quality and skill of Newton’s art. I also see how he was able to realistically distort faces and features for comedic effect. Captain Marvel always was a quasi-comedic character, and one of the challenges faced by DC when they revived him was how to keep the lightness and whimsy in the character while making him relevant and appealing to the modern world. It was a shame I did not read too many of those stories, either, because some of them were quite good, and some of them actually went into the hero’s past and explained aspects of his origin, powers, and backstory that had not been explored before.

So that would have been an interesting thing to share with Dan Didio and the lineup of artists, writers, and editors on stage. It would have also been interesting to see his reactions and hear his thoughts, considering what DC has done with the character and the concept under his watch at DC. 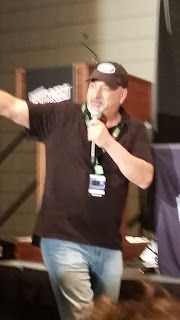 At NY Comic Con last month, I attended Dan Didio’s panel in which he has a semi-informal discussion with some of DC’s top talents and the audience. I was ostensibly there to ask him questions about Captain Marvel, but I didn’t want to be a dick and hijack the panel, so I listened and participated in the spirit of it.

One of the first questions was “What was the first comic you ever read?” I can’t remember which comic book was the first I ever read, specifically. Comics have always been a part of my life. However I can remember how some of the first few superhero comics I read gave me a very specific impression of a superhero that was probably unique to the time.

The time was the early 1970’s, and between Vietnam, Watergate, and the rise of the various youth counter-cultures,  in the popular mainstream it seemed that governmental authority was not infallible, and the hero maybe the hunted. I may have been vaguely aware of this dynamic from other elements of culture and media that I absorbed, but it really came home to me in superhero comic books.

The three comics in question were issues of Batman, Spider-Man, and Tales of Suspense featuring Captain America.

The Batman story was part of a storyline in which Batman was accused of the murder of his adversary Ra’s Al Ghul. When the story began, he was already being hunted by the police, and unearthed the dead man’s grave to find it empty. At that moment, two cops found him. He fought them and dragged one of them to the grave, only to find the body or Ra’s in it, where it had not been before! The story ended with Batman still on the lam ad Commissioner Gordon continued to direct the manhunt against him.

The Captain America story involved an imposter with a ray gun on his wrist leading high-profile bank raids. This, of course led to Captain America being a hunted man. Cap ultimately defeated the crook, but not before there were serious doubts as to whether or not he was still n the right side of the law.

Finally, the Spider-Man story was the famous first appearance of the Punisher. I don’t have much memory of this story, as the comic disappeared from my life not long after I acquired it. Lost or stolen, I imagine. I do remember that the Punisher was trying to hunt him down in the belief that he was a bad guy, and the police didn’t seem to like him much either. There was an air of desperation about his life that impressed me well.

So with these three stories, I was of the mind that to be a superhero was to be outside the law. That wearing a mask and costume to fight crime was a thing that the police and authority did not like. But since these characters were the sympathetic characters of the story, that meant that rebel fugitives were the good guys and law and authority were the bad guys.

This sort of view of things was only reinforced as I started to learn about the American Revolution (this being the bicentennial decade) and read about folks like Paul Revere doing things under cover of night to avoid the redcoats.

Artists and heroes.
Posted by Captain Zorikh at 7:32 PM No comments: 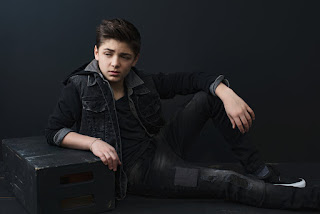 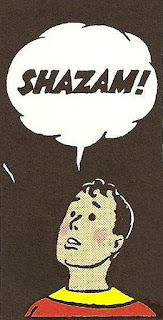 So the casting rumors, speculation, suggestions, etc fall away one by one as another casting choice for DC's "Shazam!" movie is revealed!

As reported in Variety, Asher Angel, Best known in his young career as Jonah Beck in the TV series "Andi Mack," will be playing the young boy who transforms into the World's Mightiest Mortal by saying the magic word, "SHAZAM!"

Not being familiar with his work, I cannot critique the choice on the basis of his acting chops, but he does look the part. Of course, Billy Batson was drawn generically enough that almost any young boy with black hair could look the part (in fact, my trans-gender ex-girlfriend went through a phase in his transition in which he could have played the role - ahem - marvelously).

At age 15, Asher is, of course, the first actual minor playing this role in a live-action film or TV show. The previous two actors, Frankie Coghlan, Jr in "The Adventures of Captain Marvel" and Michael Gray in "Shazam!" were both securely in their 20's when they landed the role. 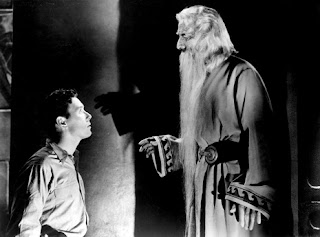 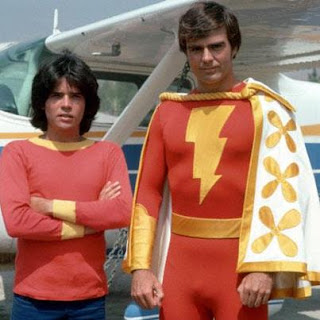 One thing that will be interesting to me is if Asher and Zachary Levi (who is playing the hero) will be able to sync up their performances to create a believable illusion of the same person inhabiting both bodies. Of course, back in the original Fawcett comics from 1940 - 1953 and the DC comics from 1973 - 1986 Billy Batson and Captain Marvel had separate personalities, though they shared memories. They would refer to each other in the third person, buy each other Christmas presents, and even had an argument at least once! It was only when Roy Thomas created "Shazam! A New Beginning" that the concept of Captain Marvel as a boy in a grown-up's body began. This was after the Crisis on infinite Earths (one of the first big company-wide crossover events in comics) re-ordered the original DC multiverse and put Captain Marvel and Superman on the same planet.

While Roy Thomas played this dynamic for drama, the new Justice League series that came out that year played int for laughs, having Captain Marvel suggest singing "Row, Row, Row Your Boat" as the team grew bored during a long flight, for instance. His juvenility led to him being underestimated in his value to the team, and he left after just a few issues.

Though DC dropped the ball on a continuing series with the World's Mightiest Mortal (a topic for another time), Jerry Ordway picked it up and re-booted the character in 1994 in "The Power Of Shazam!" graphic noel and ongoing series. He maintained the boy-as-adult-hero paradigm, balancing drama and humor. From that point there was going back. The Ordway version became the version that DC maintained until they began the New 52 in 2012. Now the default assumption is of the paradigm is "Big" as a superhero, and every appearance of the character follows that theme.

Several animated cartoon movies and series have done well with that in the balance of comedy and drama, but to me, it is not what the character was originally created to be. The wish fulfillment is that when you say a magic word, you can transform into a grownup! Your mind changes so you can think grown-up thought, handle grown-up situations. It's sort of like "Being John Malkovitch" as a superhero. You exist inside the mind and body of a mighty superhero, sharing experiences and memories, but having the time of your life on not being psychologically tortured like Roy Thomas' invention of Rick Jones and Captain Mar-Vell.

But the director, David F. Sandberg has come out and said that it will be "Big" with superheroes, so I guess that is what we are going to see.

One interesting thing about "Andi Mack" that I just discovered in researching this post is that it is "the first series on The Disney Channel to depict a character coming out as gay" (ABC News). The character of Cyrus on the show, played by Joshua Rush, came out just last month, breaking ground for the youth-oriented, family-friendly network. This adds to a surprisingly long list of connections between the name of Captain Marvel and LGBT culture. This list goes all the way back to the "Adventures of Captain Marvel" 1941 movie serial, in which the role of the wizard Shazam was played by Nigel deBrulier, who was involved in an allegedly all-gay silent film production of Oscar Wilde's Salome, a clip of which appeared in the documentary "Before Stonewall"

One last interesting thing about this casting choice. Just as the hero will be played by a man who shares my initials, ZL, the actor playing Billy Batson shares a birthday with me: September 6! This movie is becoming more and more entwined with me by the week!


Posted by Captain Zorikh at 4:37 PM No comments: