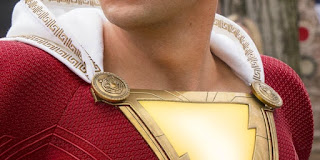 This little article posted on Heroic Hollywood shows a closeup of those buttons/clasps/brooches/whateveryouwanttocallthem on the costume of the hero of the recent SHAZAM! movie. Between that, repeated tiger references, and one particular homeless-looking guy in a crowd scene, I am pretty confident that a talking tiger will come into play in this franchise...

Mr. Tawny falls strongly into the category of "beloved" among fans of the character. He was a genial everyman, created and written by Otto Binder to represent himself and his concerns and struggles (you can find out more about this in The Fawcett Companion and Bill Schelly's biography of the writer, Words of Wonder). He was loyal and true to his friends, Billy Batson and Captain Marvel and excelled in his job as a tour guide in the local natural history museum.

Despite this, he would often seek something more, something new, something different in life. He would bemoan his boring, everyday life and fall for a get-rich-quick scheme, or try to recapture his lost youth, or gain everlasting fame or great popularity, or attempt to return to the free life of an animal in the wild.

In teh end of each of these comedic adventures, however, he would find that just being himself, a regular guy, was what was best in life and most satisfying for him.

These stories were sopme opf the best-written in the Fawcett run of Captain Marvel and the Marvel Family. the love for the character form the writer was clear, and artist C.C,. beck was at the top of his game. Gwuandanaland recently published a collection fo all of hi sstories, including the very best  C

I made mention of Mr. Tawny references in the movie in my on-the-spot review. In case you missed it, here it is...

Den of Geek has made mention of these disks and their tiger faces, also making the Mr. Tawny connection as part of a pretty thorough rundown on the suit that was designed for the movie.

And on page 2 of this ScreenRant article, the designer himself talks about the tiger imagery on the suit. 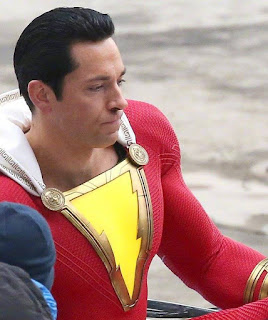 Personally, I think that Mr. Tawny is going to turn out to be that homeless-looking bearded guy who was oddly prominent in two shots of the crowd during the "caught the bus" scene. This would be consistent with Jeff Smith's  interpretation in "Monster Society" and the Superman & SHAZAM! vs. Black Adam animated short film.

What do you think?
Posted by Captain Zorikh at 4:11 AM No comments: