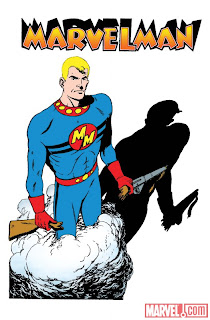 Marvel Comics has just announced that it will be reprinting old Marvelman stories starting in June. Here's the article in Marvel News:

Does this look familiar to anyone? The irony here is rather thick. This sounds a lot like the announcements that were made when DC acquired the original Captain Marvel back in 1972 and started reprints in '73, and every time they produce a reprint volume, like the "Shazam Family Annual" a few years back, and their hardcover "Archive Editions" and softcover "Showcase" editions.

The comic book market is very different these days from what it was in the 1940's - '50's. Back then it was almost reasonable to think that someone would confuse one superhero for another from such superficial similarities as the fact that they wore a cape, were super-strong and invulnerable, and threw cars around. Today there are so many superheroes that it's hard not to find similarities between them, but the readers are savvy enough know one character from another.

If DC had any claim on Marvelman, they should have (would have?) staked it when Eclipse published their books in the 1980's, so it's not likely they will be suing Marvel for this. But now Marvel will find out if they can attract an audience with their character that has been dead for 20 years, and that had been dead for 17 years before that.

Captain Mar-Vell, not your typical superhero

I wanted to post this page from Marvel Comics' Captain Marvel #55, March 1978, written by Scott Edelman, penciled by Pat Broderick, and inked by Bob Wiacek. In this issue, Mar-Vell decides that he must get a job to stay on Earth. 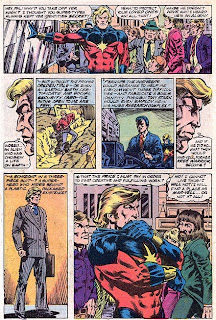 Mar-Vell is unlike most other superheroes. He is an alien with no true alter ego. For much of his time on Earth he would trade atoms with Rick Jones. but this was not a typical "in costume/out of costume" situation, it was two distinct people sharing time between Earth and the Negative Zoe. But by this issue, even that relationship had been severed, and Mar-Vel was a man on his own.

He'd had a brief period with an alter ego in his first dozen or so issues, when he would disguise himself as the mysterious rocket scientist Walter Lawson. But he abandoned that identity when situations forced him to leave Earth. Ironically, in this issue, he was faced with an adversary who had been a victim of one of his battles in his Walter Lawson period, but that's not why I posted this page.

I wanted to point out how, briefly and efficiently, Mar-Vell describes the difficulty an alien on Earth would have getting a job, and how his life would have to be if he were to follow the example of almost every other superhero. He would then become "--a schizoid in a three piece suit--" pointedly illustrated by the absurd picture of Mar-Vell in office attire, including glasses.

But no, Mar-Vell rejects that model, and decides that he will make his way in the world as himself "...or not at all!"

You go, boy! Way to reject the status quo! How many of us live schizoid existences, going to work so as to support the life that we really wish we had? I have been there, I have done that, and every time I have to do it, it kills a piece of me. How many of us want to be remembered as the person ho did the specific day job that we do? Wouldn't it be more satisfying and fulfilling to be remembered for doing what we love? Id if we cannot make our way in the world doing what we love, being who we are, then are we really truly complete beings?

Just a thought, and perhaps a good topic for debate...
Posted by Captain Zorikh at 8:32 PM No comments:

"Bataman: The Brave and the Bold" aired a full episode of Captain Marvel, and a very nice person posted it up on Veoh. Here it is:


Watch Batman The Brave and The Bold The Power of Shazam! in Animation  |  View More Free Videos Online at Veoh.com

A few things about it: First, I liked it a lot. It was fun, exciting, and had lots of good superhero and evil villain action. Physical absurdities were acceptable because of the medium (animated cartoons) and genre (Saturday morning cartoons).

Second, it paid tribute to the history of the character. News reporter "Tom Tyler" was named after the actor who portrayed the hero in the "Adventures of Captain Marvel" serial. One of the bullies in the orphanage was called "C. C.," the initials of the first artist to draw the hero. The subway car that took Billy and Batman to the throne room of Shazam was a perfect copy of the one in Whiz Comics, and the posters on the wall of Billy's room were good copies of old Whiz, Captain Marvel Adventures, and Shazam covers. The "Captain Sivana" thing happened in a a DC Comics Presents Annual written by Roy Thomas and drawn by Gil Kane in which the evil scientist managed to harness the magic of Shazam. The "reverse marvel" uniform appeared in a story from the 1970's "Shazam" comic series. Dr. Sivana's announced plan to shut down all wireless signals harkens back to the "Radio silencer" of the very first Captain Marvel story. The broken locked was the McGuffin of the story that introduced Billy's twin sister (nice to see they went back to the concept of twins, rather than Mary being a younger sister, like in the current DC incarnation). The stuffed tiger that looks like Calvin's Hobbs is an obvious reference to Jerry Ordway's version of Mr. Tawny from "Power of Shazam." Sivana bringing Black Adam to Earth was from the "Shazam: A New Beginning" miniseries by Roy Thomas and Tom Mandrake in the 1980's. Even the origin of Black Adam and the method by which he was defeated was used in Marvel Family #1, the very first appearance of the villain (it was also used in the "Shazam" cartoon series).

I'm not so sure how much I like Sivana Junior and Georgia having English accents, but their characters were very consistent with the classic villains in the comics. Sivana's "ha ha ha" laugh was not quite the "heh heh heh" I expected, but his plots and plans, threatening one catastrophe as a cover for a greater plan, and bringing in a powerful ally only to betray him in the end, in very in keeping with the character.

While there were some implications that Captain Marvel was young at heart, they did not play him like he was a kid in a man;s body, what was good for me. Personally, I like the idea that they are two different people that share memories. If you are the same person when one or the other, why not stay big and powewrful all the time? By beign an actual different person, then you have fodder for more stories, such as incidents where Captain MArvel can get into the kind of trouble that Billy Batson can avoid or get out of (In the Fawcett days, this was played for comedy a few times, mostly involving relationships with women).

In sum, if the long-promised "Shazam" movie ever comes about, this is not a bad template.
Posted by Captain Zorikh at 4:53 AM 1 comment: