So Marvel Comics has announced that there will be an all-female team of Avengers in their upcoming "event," Secret Wars. The news has been announced on, as should by now be expected, bunches of websites, and almost all of them included this image... 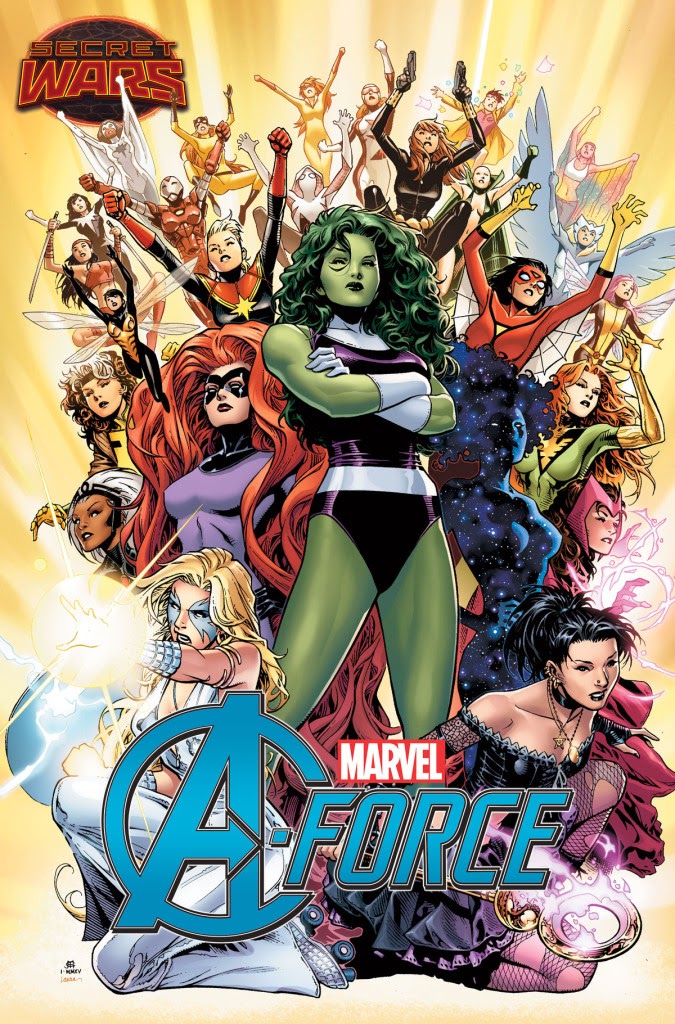 Among the characters portrayed are two Captain Marvels: Carol Danvers and Monica Rambeau. What with Danvers being Marvel Comics' premiere female at the moment (she has her own regular series, as well as appearing in certain "Avengers" titles and "Guardians of the Galaxy," and is the white Queen" in a chess set Marvel has just released in England), I am a little surprised that she is not front-and-center.

Josh Dickey at mashable.com was apparently the first to report the news, in an article remarkable for its knowledge of the subject of female superheroes, even pointing out that there have been 14 female super-teams before this one (who wants to guess them all? I can think of Birds of Prey and specific lineups of the Defenders and the X-Men, plus one lineup of the Justice League put together for a specific mission. Does the Marvel's Divas series count?

Michael Cavna and David Betancourt of The Washington Post combined this news in an article with news that DC Comics was ending their "New 52" in June and resetting their universe. Obviously not a lot of comics fans read the Washington Post on line, because there are only two comments as of this writing, whereas other websites' comments counts are running anywhere from the 80's to the 140's, etc.

Apparently Salon doesn't get read by many comics fans either. They didn't even bother writing their own article, just reprinted Jesse J. Holland's brief but detailed Associated Press report, and only got one comment on it.

Newsmax, a politically-leaning website, did not even get one comment on Margan Chilson's article, that basically just quotes reports from USA Today by Brian Tuitt (which includes a lot of detailed and insightful interview response from writer G Willow Wilson) and Entertainment Weekly by Joshua Rivera.

Huffington Post dutifully reported this news in an article by Jessica Goodman. Since this is, after all, news, UPI has a minimalist report by Veronica Linares. And since this is entertainment news, the Hollywood Reporter posted a brief report by Graeme McMillan that basically quoted the article from Mashable and called it a day.

But the prize for most brief article is an uncredited post on 4GeeksLikeYou. Two short paragraphs and a quotation.

The most sensationalistic, yet analytical article of all, the one most worthy of being called "journalism" in this vast wasteland of clickbait, copy-paste, and shallow announcements, is Michael Calia's article in the Wall Street Journal. It is the only article I found that linked to the original Marvel Comics announcement, and looks like it was even updated after its original publication to amend a report that the announcement would be made on the TV show "The View" after that segment was cut from the show. Among its many worthy observations (peppered with stock quotes for companies mentioned in the article like Disney and Warner's) is that while many are decrying the move for being a "gimmick" or "stunt," " the comics business has always been about gimmicks and stunts, so there’s nothing new to see here in that regard."

And speaking of that report that was cut out of "The View," this surprisingly thorough article by Bdc Lives on Moviepilot uses that bit of scandal as a clickbait headline.

The funniest thing about this whole business to me is the name of this new team: "A-Force." Jesse Shedeen on ign.com supposes that this name is meant to recall "X-Force," a title from the 1980's and '90's. (Incidentally, that same website also announced the "tease" of the news the day before) Some might think it was inspired by the TV show "The A-Team." Several commenters recalled the fictional TV pilot mentioned in the movie Pulp Fiction, "Fox Force Five." almost every comments section with more than three comments included one about how the team should be called "V-Force."  My...awkwardness with the name is how there is another word that starts with "a - hyphen..." that has been getting a lot of play on TV lately, and maybe it's just my mind being in the gutter, but I can't help thinking of that word when I see this name.

Personally, I never thought I lived in the gutter, more like perched on a mailbox or something.

What do you think about this news?

Posted by Captain Zorikh at 8:48 PM No comments: