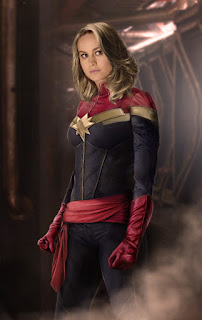 Out of all the excitement at New York Comic Con this past week, there was a bit of Captain Marvel news. It seems that Marvel Studios president Kevin Feige has said two things:

You can read all the various announcements and clickbait from the links below. Here is what is important about this news:

When the first modern superhero movie, "Superman: The Movie," came out in 1978, it began with the origin of Superman. When "Batman" came out in 1989, it included the heroe's origin. Almost every successive Batman movie included something about his origin. The Captain America, Punisher, and Fantastic Four movies of the late 1980's through the 1990's all included their origins. Each of the Spider-Man franchises on TV and theaters since the 1970's began with origin stories. Even independent and lesser-known heroes characters like Darkman and The Mask told origin stories.

Frankly, it gets a little boring. For a long time my favorite superhero movie was "Batman Returns" because it was the only one that did not replay the freakin' origin of Batman!

Now, however, that the Superhero movies of the New Millennium have proven the profitability of the genre, and one after another character is given their own movie series, creators are free to move beyond the origin stories and get right down to the adventure. This has made the movies much less repetitive and more watchable.

So now that it has been announced, in a throwaway sentence fragment as part of a larger conversation, that "...Captain Marvel is certainly an origin story from the start," We will all collectively hope that the movie will be more than a re-hash of the familiar superhero tropes, different only in the names and places.

One indication that this might be the case is that screenwriter Nicole Perlman has revealed that they would not be sticking with the origin of Carol Danvers/Captain Marvel that is in the comics.

I am wary of what this may mean. The reasoning behind whatever changes they make has been announced to be because it is felt that the origin of this Captain Marvel is too similar to Green Lantern (here is how Time reported it). To wit: and alien comes to Earth and gives a human his powers when he dies. That is an over-simplification of what happened in the case of Marvel Comics' Captain MArvel, and it seems pretty disingenuous. Mar-Vell (Marvel's first Captain Marvel) operated on Earth for years before Danvers got her powers, he did not die until years later, and Danvers was not involved in the story of his death at all (I will have to ask Jim Starlin about why that is, but I suspect it was simply because he simply did not think of it). More recently, Mar-Vell was brought back to life in the "Avengers vs. X-Men" storyline, and died saving the universe, after which Danvers was inspired to take on his name and legacy.

But regardless of whether you think the Mar-Vell-Danvers origin story is too much like the Abin Sur-Hal Jordan origin story, the fact is that Mar-Vell is the original Marvel Comics Captain Marvel. He was a good character, subject to many conflicts and challenges, and hit a new level or awesomeness when he became the "protector of the Universe" with the Cosmic Awareness granted him by Eon. He was also the first hero to face Thanos and defeat him when he was on the threshold of victory, conquering the universe and giving it to his love, Death. It would be a shame if, in their interest to create a new origin story, that they leave him out of it.

So much of the Marvel Cinematic Universe, both seen and announces as to be seen, is built upon element that first appeared as part of Mar-Vell's stories or were significantly involved with Mar-Vell. This includes Ronan the Accuser and the entire Kree race, Thanos, Drax the Destroyer, Eon, evena tiny Easter egg reference to "Richard Jones." I, for one, will be very disappointed if Mar-Vell does not show up in there somewhere.

As far as the "most powerful character" thing goes, remember that in Marvel Comics' "House of M" storyline, Carol Danvers was "Captain Marvel, the world's greatest hero" (this was still some years before the became Captain Marvel for the present). Recently ishe has displayed great strength, speed, and invulnerability, in addition ot her power-absorption and projection. IT is not too far a stretch to have her trading blows with Thor and the Hulk as they have been presented so far. It will give the MCU a woman of equivalent power levels as the big boys, and that is always good for broadening the market base.

We still have over two years to go before his movie comes out, and a director has not yet been chosen. But at least it's nice to see that Ms. Larsen is getting into the role... 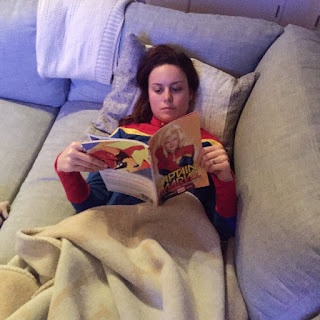 And here are the website articles and postings I bothered to find:
Cinema Blend
Comic Book Movie
The Daily Dot
Flickreel
Press Trust of India
Collider
Business Standard
We Got This Covered
Joblo
Info-Europa
The Stopru


Posted by Captain Zorikh at 10:06 PM No comments: