(continued from previous post)...Of course, a "by the numbers" adventure with the Marvel Family is still fun (especially when you add Mr. Taawny in an open-cockpit WWII fighter plane). And the subtle combination of the lighthearted elements of the Shazam heroes and villains with some logical character explorations and the deeper, darker dimensions of the Multiverse was handled with great skill, allowing the reader to enjoy the ride while appreciating the depth. 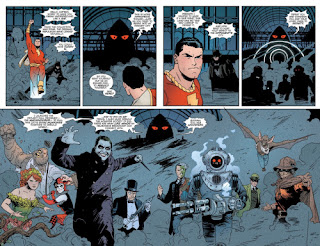 But as I said, a great opportunity was missed here. Gotham by Gaslight, on its face, appears to be a drastically different world than that of what DC called "Fawcett City" on Earth-S or Earth-5. It is a dark, scary, treacherous, mysterious, well...Gothic...place. However Billy, Mary, and Freddy are not actually strangers to such a world. On several occasions, both individually and as a family the Marvels found themselves in such environs, Freddy in particular lived in a quasi-gothic evnironment, especially when drawn by Mac Raboy. He dressed in rags, lived in a run-down boarding house, and often found himself defending orphans, waifs, and even magical fairy creatures that would not be unfamiliar to a Victorian audience.

It would have been interesting to see the Marvel Family deal with the challenges of a dark Victorian, steampunk adventure in a full-length story. In their human selves, I could see Billy, the young adventurer, intrepidly seeking clues, while Mary, the adopted daughter of privilege, and Freddy, the poor orphan boy, being concerned with the welfare of the downtrodden. As their heroic personas, Captain Marvel would be initially perplexed by the mysterious ways of the creatures of darkness, Mary Marvel would be drawn to the plight of the underclass, while Captain Marvel Junior would use his familiarity with the environment to start to see the solution. Together, their wisdom and courage would see them through. It's quite possible their strength, speed, and abilities would help the Batman of this world solve a mystery that had eluded him, and perhaps, in a more ambitious tale, would even help him solve a particular social evil.

But this was just a one-time, two issue story that was part of a bigger, company-wide, crossover epic. We will probably never see this combination of characters and worlds ever again (outside of fan fiction, of course). In time, it will be reprinted in a trade paperback collection, perhaps a giant omnibus edition, but it is unlikely that it will be one of the Great Epic Tales that will be remembered in the annals of comic book history.

So we will see what DC will do with the former Fawcett characters in whatever world will emerge from "Convergence.." I hope they will return these characters to their roots with their original names, powers, and characteristics. They cave the DC universe a lighter touch and needed balance when things got all grim 'n' gritty in the 1990's. I prefer that Billy and Cap have separate consciousnesses, but if they must have the same mind, at least have Billy be the kind of kid to whom you would want to give superpowers. If you want to have a troubled kid find redemption, make up a new character. You could even have him be in the "Shazam" family, but let the first, the original, the leading Hero of the Word be a brave, pure, good soul to set an example for the rest. 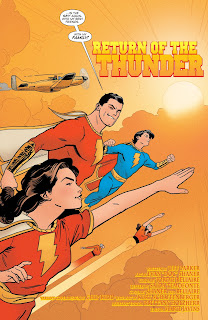