So I have visited almost every web page with news about one or another Captain Marvel or "Shazam," and every YouTube video I could find about the same subjects. I was hard pressed to find a single one that did not have some factual error or two or ten in it, no matter how authoritative they presented themselves. Therefore, I decided to answer them all with this little video. I managed to cram19 different Captain Marvels into 24 minutes. There are one or two or three more, but these, I figure, are the main ones you should know about.

...and for some stupid reason the "Search YouTube" function on Blogger can't find my video.  So just click on the link and watch it in a new window.

When I get a chance, I will try to make a shorter version and put pictures in it.
Posted by Captain Zorikh at 9:05 AM No comments:

And now it is officially obvious...

Dwayne Johnson himself has just hit Twitter with the news that he will be playng Black Adam in an upcoming "Shazam!" motion picture, making official years of rumors, dreams, teases, and fears. 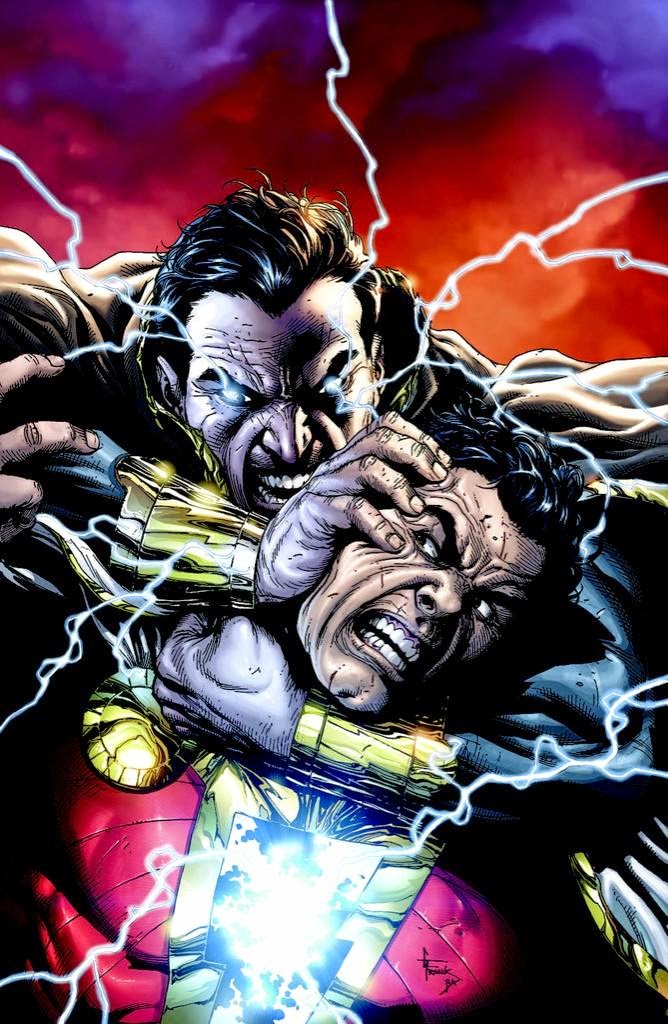 (In case you don't know, Black Adam is one of Captain Marvel's primary adversaries. In his original incarnation, he was a man in ancient Egypt who was given the same powers by the same wizard as Captain Marvel, but who used them to kill the pharaoh and seize the throne. He was banished to the farthest star, took 5,000 years to fly back, and then was defeated by the Marvel Family. In his more recent interpretation, he was the leader of the nation of Kandaq in ancient times, again with the same powers from the same wizard as Captain Marvel, before being banished, and returned to rule the nation again, was a hero for a time, but proved to be a violent, unstoppable psychopath when his wife was killed. He is a character of Superman-level powers and Machiavellian morality with no qualms about killing or destroying anything that gets in his way.)

This may be the closest the movie has come to being made. The earliest I can remember the movie being talked about was 2003. There was a script by William Goldman that was rejected and others written, Peter Segal was supposed to direct it and then, some years later, said it was not gonna happen, Jake Gyllenhall was rumored to be cast as the hero, and then, somewhere in there, was a poll by MTV asking whether Mr. Johnson (aka "The Rock" of WWE fame) should play Captain Marvel or Black Adam. The result was overwhelmingly in favor of Black Adam.

Mr. Johnson has been teasing us for the past couple of months, saying that he was supposed to play a character, "say the word," that it could be Shazam or Black Adam, that it would be an anti hero, and of course that fans weighed in with the passion of a UN debate, saying that because of his looks he should play Black Adam, that we should not consider race, that he was perfect to play a young kid in a man's body due to his recent comedy work, That he would be a great villain, that he would be a lousy villain, that Shazam is not an anti-hero, but Black Adam is, that his acting sucks, that he ought to play John Steward (Green Lantern), or Lobo, and of course all the confusion about whether the hero's name  was "Shazam" or "Captain Marvel," and the attendant misinformation about the history of the character, the lawsuit, the trademark, etc. And I am guilty of sending maybe too much time trying to set the record straight about all that history stuff.

Well, here we go again. The news is now bigger, it will hit more mainstream news outlets, and the freaks will come out of the woodwork. Perhaps this will bring more people to read up the old Captain Marvel stories, which were actually pretty good. Personally, I think that the stories drawn by Don Newton published as a backup feature in "World's Finest" comics in the late 1970's and early '80's are an under appreciated body of work and worthy of rediscovery.

My one big question is this: Will the production be based on the "New 52" reboot of the character, named "Shazam" (if you don't know, DC Comics rebooted their entire universe of characters in 2012, and took their character that had been named "Captain Marvel" and changed his costume a bit, made a few alterations to his origin, and changed his name to "Shazam"), or on a version of the classic character named "Captain Marvel" (of whom there have actually been at least four distinct versions, the most recently popular of which first appeared in 1993 and was published in the graphic novel and ongoing series "Power of Shazam!"). Which version they choose will probably define which name they actually use for the character.

There is a lot of creative risk involved in this upcoming movie. The original stories from Fawcett Publications had an elusively light touch while, in their best moments, being brilliantly efficient, well-told stories. It took a while for DC Comics to find its stride, but once it did, also told well-built stories with a light, whimsical touch. In these stories real-life concerns, such as the psychological effects of a boy and a hero sharing the same memories but having different personalities, or the effects of a transformational bolt of lightning on the surrounding area, were not considered. It was magic! It's a comic book! In the "Power of Shazam!" stories, Captain Marvel had the mind of Billy Batson, and so the angle of the writing was about how the young boy dealt with being a hero. Being the most recently popular interpretation of the character, that is likely to be the direction the story will go, but that is a difficult thing to get right. "Freaky Friday" and Big" explored similar territory, becoming successful comedies, but will the "Shazam" movie be a comedy.

"Whimsy," as opposed to broad comedy, is a tough genre in which to write, not to mention act. This movie has the unenviable task of pleasing a small audience of fans while reaching the mainstream. Comic book movies have been getting better and better lately, listening to the fans and trusting the material. But the material of Captain Marvel is so elusive, many fans of his current incarnation have little experience with his classic version. I have a hard time envisioning a movie that will serve the modern interpretations, either PoS or New 52, that will satisfy me as a fan of the classic version. If a good movie is made, I will be satisfied that another good superhero movie is made, and appreciate it on that level, taking it on its own terms. But I doubt it will serve the original character.

UPDATE: Here is the fluff piece from ComicBookResources spreading the word...http://www.comicbookresources.com/?page=article&id=55260