POWER of SHAZAM! and the history of ALL the Captain Marvels (Part 14)

Note: This page is continually being updated. Please feel free to revisit to see updates as more information and images get added to this entry.

In the early 1990's DC wagged its tail to the speculator market no less than Marvel. Although they did not have an exodus of artists like Marvel, they still needed to do something to remain relevant. Thus came The Death of Superman.

As we saw in the last chapter, the 1993 Death of Superman saga at DC was the high-water mark of the speculator's market and the comics industry serving it. As we also saw in Part 11 of this history, DC had combined all of its multiple "universes" into one through the Crisis on Infinite Earths in the 1980's. As the 1990's approached the midway point, both of these events were showing their downsides. The speculator's market bubble burst, leading to a precipitous decline in sales across the board, and inherent contradictions and unsettled character histories revealed weaknesses in the continuity of the new DC universe.

In an apparently unrelated move, the SHAZAM! franchise was revived.

DC's version of the original Captain Marvel, now (as of Part 12 of this history), the version created by Roy Thomas in SHAZAM! The New Beginning, had not been seen much since that 1986 mini-series. John Byrne proposed a version, wrote a story, and even drew a couple of pages, but that project never saw fruition. The Big Red Cheese did make big appearances; in 1991, as part of the War of the Gods miniseries, and in 1992, battling a Superman possessed by the villain Eclipso. 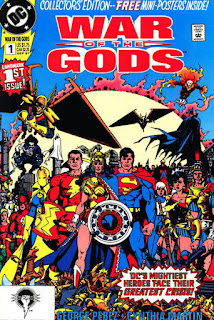 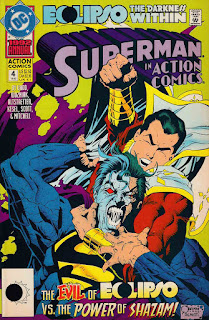 But while all this was happening, in 1991 Jerry Ordway was asked (according to his introduction in the most recent reprint volume of DC's initial revival of Captain Marvel and the Marvel Family) to "relaunch the SHAZAM! characters." He researched the DC revival, the Fawcett comics, and even the Republic Pictures' Adventures of Captain Marvel serial. In 1994, his new graphic novel, The Power of SHAZAM! was released. 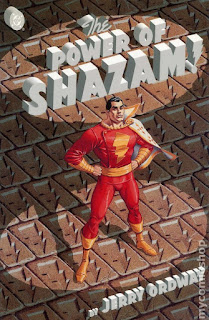 This gloriously drawn and painted, this new production was a loving tribute to the character and its history, but made certain drastic departures from the original stories. 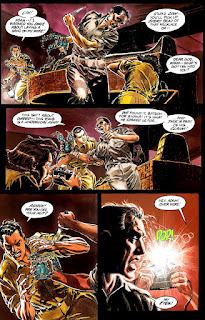 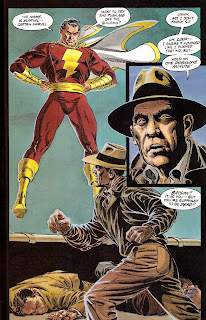 In this story, Billy's parents, C.C. and Marilyn Beck, were archaeologists murdered during a dig in Egypt by Theo Adam, in the employ of Thaddeus Sivana, the wealthy industrialist who financed the mission. Billy wound up selling papers and living on the street when he was taken to the wizard Shazam by a stranger through a subway tunnel. Once he got his powers, though, he hated them. They were confusing and he lacked the maturity and experience to use them properly.

(And yes, this was where the recent movie got the names of Billy's parents.)

The "McGuffin" of the story, a scarab necklace on an ancient mummy, gave Theo Adam the power to transform into Black Adam, and it turned out that he was really the ancient villain reincarnated. He quit Sivana's employ, Sivana's financial empire and plans and schemes crumbled, Billy adapted to being Captain Marvel and defeated Black Adam, and the stranger who had led Billy to the old wizard turned out to be the spirit of his dead father.

But this was a different Captain Marvel. Set in a more realistic world where a 10-year-old boy living on his own would be snatched up by civil authorities, Billy Batson had to figure out how to survive, and turned out to be a scrappy, self-reliant survivor.

Jerry Ordway established Fawcett City as the home of Billy Batson/Captain Marvel (after Roy Thomas had created it for a story in All Star Squadron about ten years earlier) and made the city one that retained the modernist Art Deco style of the 1930's. This and other elements were blatant tributes to the Fawcett stories and the work of the writers, artists, and editors of those days. Streets were named after Fawcett-era writer Otto Binder and artist C.C. Beck, Billy's father was named after Beck, a scene of Captain Marvel throwing a car against a wall was an obvious tribute to the cover of Whiz Comics #2, and the subway tunnel, train car, and throne room of the old wizard were adapted very faithfully (with some detailization) from the original story.

The book was a big hit, critically and commercially, and led to a new series of the same title.

But before that new series began, in September 1994, DC began a new, company-wide, crossover epic miniseries, Zero Hour. It seems that the Crisis on Infinite Earths series of 1986 had set up a bunch of contradictions and failed to resolve certain matters in the DC Universe, so Zero Hour was an attempt to fix it. 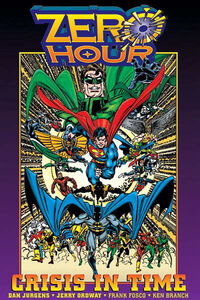 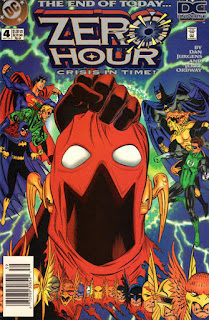 As a result, a new DC Universe was established, mostly similar to the previous one, but it was assumed by most who cared that this re-invention of Captain Marvel was to belong to this post-Zero Hour world. 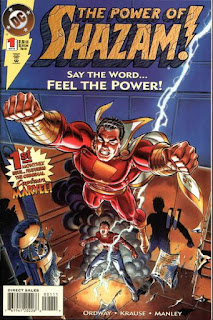 And thus did the new Power of SHAZAM! ongoing series begin in 1995. Set a few years after the graphic novel, Billy had his job at WHIZ broadcasting and was attending school. The school janitor, Mr. Dudley, helped the boy out where he could. Billy's uncle, Ebenezer Batson, had thrown him out on the street. In his Captain Marvel form, Billy would sometimes disguise himself to act as his own uncle or get work on the side.

The wizard Shazam played a much more integral part in the stories than he had in the Fawcett and pre-Crisis DC stories. It was revealed that his throne room was in the Rock of Eternity which was reached through a dimensional barrier. The old wizard had cast a spell on Fawcett City to make time pass more slowly and protect it from certain dangers, thus ensuring it kept it's Art Deco look and 1930's-'40's styles and cars all the way to the end of the 20th century.

Theo Adam/Black Adam was a regular adversary of the Marvel Family through the series. Eventually the Theo Adam personality was completely subsumed by Black Adam, to the point where his alter ego was his ancient self - Teth Adam.

The series started with both Billy and the wizard looking for Billy's sister Mary, and found that she had been adopted by the wealthy Bromfields, Nick and Nora (obviously based on the comedy-detective duo from the 1930's "Thin Man" series of films).

Mr. Tawny, the talking tiger from the Fawcett/DC comics, turned up as a "pookah," a Celtic shape-changing spirit who appeared to most everyone as a stuffed tiger doll, but to Billy and Mary was a full-size, anthropomorphic tiger. He guided Mary to say the magic word, granting her powers, but instead of calling herself "Mary Marvel," she called herself "Captain Marvel," so now there were two Captain Marvels. 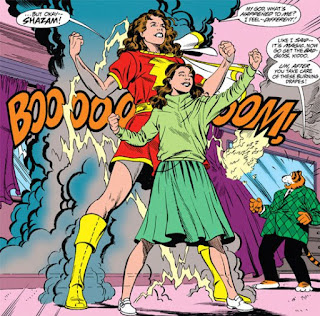 Freddy Freeman was a recurring character as well, a star high school athlete and Big Man On Campus, but near-death injury resulting from Billy/CM's battle with Captain Nazi led to him being orphaned and granted the power to become Captain Marvel, Jr. by saying that "Captain Marvel." Because of the difficulty in introducing himself without transforming, he eventually chose to call himself "CM3." 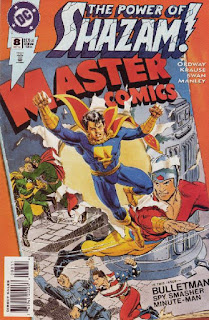 CM3 at first had a crush on Mary, but it didn't go over well with Billy, so the third Marvel left town, joined the Teen Titans, and later the more edgy Outsiders. 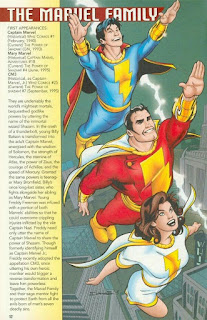 The wizard Shazam involved himself directly in the lives of the Marvel Family, breaking up arguments and guiding them to important tasks. At one point he left the Rock of Eternity to explore life on Earth again, often comparing life today with that of the 1930's and '40's, a period of which he was fond, hence the magic spell he had cast over Fawcett City.

One unique detail regarding the powers of the Marvel Family in this version was that they were limited. When two or more of them were in their "Marvel" identity, that limited power was shared. So each of them became less powerful, less invulnerable. Black Adam was even able to break Billy/CM's arm under such circumstances. This limitation, however, was eventually eliminated when Ibis upgraded their powers while covering the old Wizard's position at the Rock of Eternity.

The wizard Shazam was brought into DC's magical realms, including the afterlife, and a couple of supernatural Superman villains, Blaze and Satanus, were revealed to be his children. The old wizard even advanced to godhood before the series was over (in the polytheist, mythological, Jack Kirby's New Gods style).

Mr. Tawny, it turned out, had been a stuffed animal all along, but given the opportunity to be "real" by Blaze, if he did her bidding. When Blaze was defeated, Ibis gave him the option of remaining a real, anthropomorphic, talking tiger. He jumped at the chance, and became a recurring character in the DC universe.

The series, like the graphic novel, had a lot of references to the Fawcett years. Street names, businesses, and characters were named after writers, artists and editors from Fawcett. Obscure characters like "Muscles" McGinnis made appearances, as well as old Fawcett heroes like Ibis the Invincible and his companion Taia, Bulletman and Bulletgirl, Mr. Scarlet (actually his old sidekick Pinky bearing his former mentor's identity), Spy Smasher, Minute Man, and Lance O'Casey.

The series lasted for 47 issues (with one extra "One Million" issue as part of a company-wide crossover event that some count as the 48th). In it Ordway was able to explore the awkwardnesses of Billy trying to get along in adult society as a superhero although he was a teenage boy. He eventually got adopted by the Bromfields and they were able to live together as a family.

Additional Shazam-powered characters, some named "Captain Marvel," some not, were created in this series: C.C. and Marilyn Batson were Captain Marvels in an alternate timeline created by Sivana (now refered to as "Dr. Sivana.") 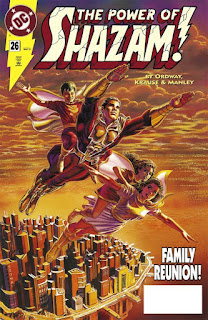 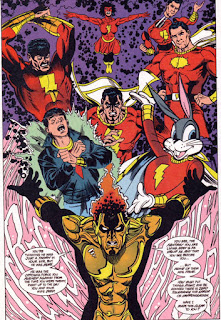 In Power of SHAZAM! One Million, the hero was a young man on the planet Mercury named Tanist, granted the power by an aged Billy Batson/Captain Marvel in the far future. 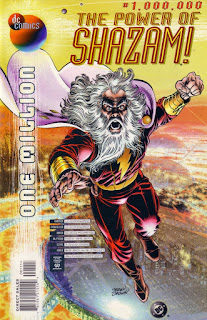 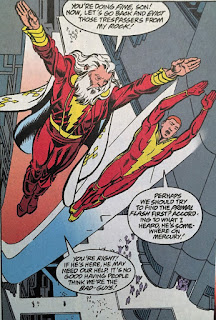 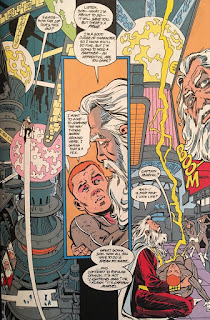 In the 1996 Power of SHAZAM! Annual, the hero was Cecebeck, who took the name "Thunder" when superpowered. She would later join the Legion of Super-Heroes. 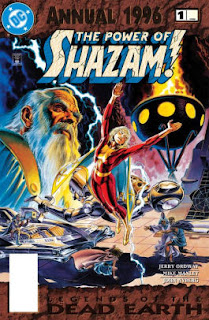 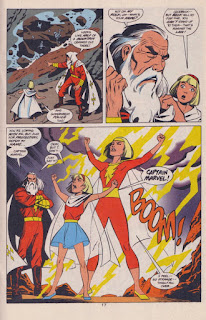 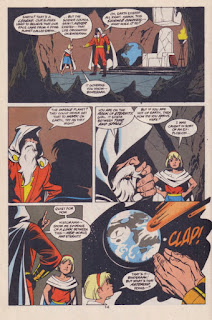 DC had created a line of books under the imprint "Elseworlds," in which the heroes were put into alternate histories, contexts and situations. In Elseworld's Finest: Supergirl & Batgirl #1 (September, 1998) there was a Captain Marvel in the Justice Society. This was the first black Captain Marvel to see print in DC. 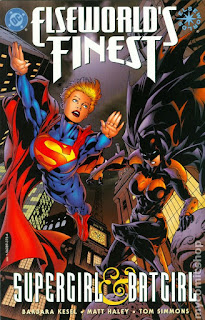 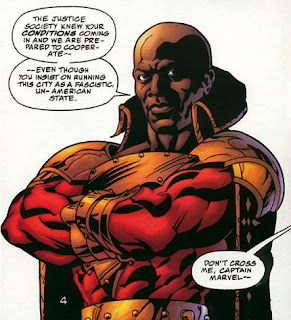 During this time, Captain Marvel made significant appearances in miniseries like Kingdom Come and Underworld Unleashed. When used to best effect, Billy Batson's humanity, youth, and purity of heart were deciding factors in the outcomes of the stories. 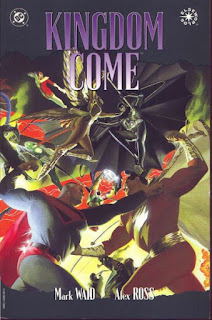 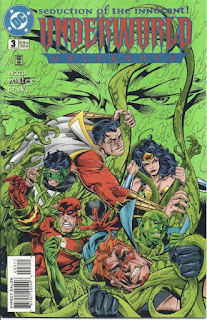 During this time the Big Red Cheese shared stories with many DC heroes, both as guests in their books and with them as guests in his, including Superman, Batman, the Flash, Green Lantern, Plastic Man, Starman, and even this old favorite... 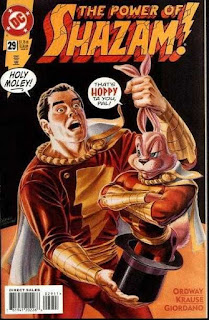 The series was highly regarded critically and sold well, but not well enough to avoid being cancelled just shy of its 50th issue (which disappointed Ordway). The final issue had a cover that was directly inspired by the cover of the final issue of DC's first SHAZAM! series: 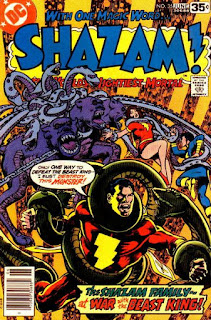 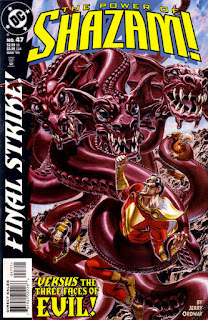 But though this series did not last out the decade, this Captain Marvel remained a major player in the DC universe...

Next for the DC Marvels: Society, Leagues, and crises, crises, crises!
For the Marvel Marvels: Genis-Vell cracks up! and Marvels, Marvels everywhere!