As a lover of the classics, sometimes I am a little bit behind the times. It ass only just recently that I discovered the term "clickbait," but now I get it. Claickbait is when you post something with a headline that is sure to get people's attention so they will go to your webpage. whie they are theere they will hopefully click on other sponsored links and get you money.

It does not matter if these headlines are false, misleading, or outright lies, and the stories are filled with inaccuracies, innuendo, speculative ideas with little to back them up, are simply are not what the headline said they would be, or are little more than a mention that something was said on another website and a link to that website, so long as they get people to your website. Some of the most egregious examples in recent years, for instance, have included stuff about the Affordable Care Act ("Obamacare"), the birthplace and religion of the president of the United States of America, and pretty much anything involving the casting of new superhero movies, as we have reported already here and here (see how I did that? Be sure to click on the ads and the Amazon links to support Captain Marvel Culture).

The latest example of this regarding a Captain Marvel concerns a recent interview with DigitalSpy.com in which Joss Whedon, famous for creating the "Buffy the Vampire Slayer" and "Agents of Shield" TV series and directing the recent Avengers movie, claimed that there was a lack of female superhero movies because of "genuine, recalcitrant, intractable sexism, and old-fashioned quiet misogyny that goes on."

This quote was the basis of an article in ScreenRant.com yesterday which already has thre pages of comments, including one coment postad about a half-dozen times by the same guy proposing that thePatsy Walke, Marvel's character "Hellcat," be put in a movie. I guess that guy didn't use his "refresh" button or something after he posted ;).

The article itself went into slight depth about the subject, pointing out that shortly after the interview Marvel announced it's upcoming slate of movies, including Captain Marvel, and posted a lovely picture of Carol Danvers in her new costume: 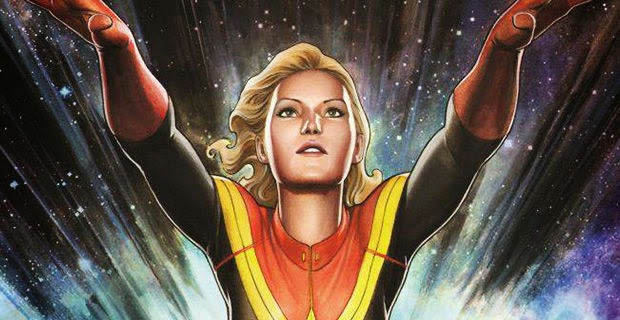 Then they went on to talk about the X-Men female heroes in the X-Men movies, and then called for comments.
It seems now that BuzzFeed.com did a telephone interview with the director and posted it on Thursday in which they asked hm, among other things, if he would be directing Marvel's Captain Marvel. He said that he "wouldn;t rule anything out" but that he was more inerested in creating his own universe He commened a little more on the character, saying...
"Captain Marvel I don’t know as well. There have been a few [versions] of her. I have the first issue of Ms. Marvel, back when she was that, and had the Farrah hair. My only issue with her is that she always felt sort of on top. She was very driven. A winner. I always like to dig into the soil of things to find my heroes, if I can."
This makes me think he would probably want to read a little bit more about her, seeing as how she has hit bottom a couple of times since that first issue in 1976.

The interview went on to talk about The Hunger Games, Lucy, X-Men, and looking for a girl in comics over which to have crush. Nevertheless, the clickbaiters went into action
The real clickbait culprits came hard on the heels of this, with articles on CinemaBlend.com and ComicBookMovie.com posting the question "Could Joss Whedon direct Captain Marvel?" Both articles then quote enough from the interview to make it clear, as the interview does, that no one has talked to him about it, he isn't jumping at the chance, there have been no announcements made, and there are other things he would rather do.
So congratulations, guys, you got me to go to your web pages, to read pretty much the same thing three times over, and now, beause I feel that it would help my Captain Marvel Culture research project to report on all things Captain Marvel, I just spent a good chunk of this morning writing about it!
Maybe I should make this blog into a clickbait site....
Posted by Captain Zorikh at 10:07 AM No comments: 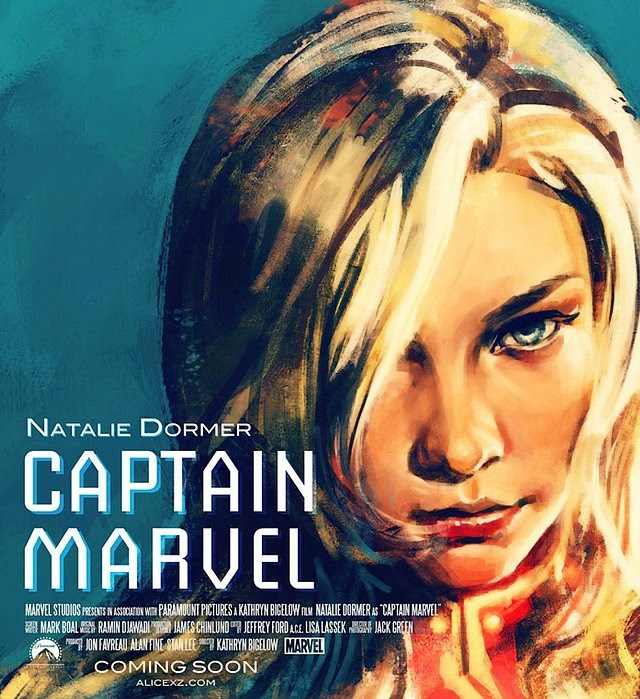 At MoviePilot.com, contributor Elle J listed a whole bunch of reasons why Natalie Dormer, that hot chick who has shown up as a blonde in "Captain America: The First Avenger," and the latest "Hunger Games" movie, and as a brunette in "Game of Thrones" and The Tudors," would make the perfect Carol Danvers/Captain Marvel in Marvel's upcoming "Captain Marvel" movie, slated for release in 2018. These reasons include "Age Appropriate," "Physical Skill," and "Difficult Relationships."

Now, there have been no announcements about this movie, really, beyond the fact that it is going to be made. It seems that every other week there is another rumor, report, or wishful think about one actress or another who would be "perfect" for the role. Sometimes these actresses don't even know anything about the character

And now this particular wishful think has been picked up by another contributor to the same website. Kit Simpson Browne has written a whole article about it. In it he supposes that Natalie Dormer's appearance in "Captain America was as Carol Danvers' mother or grandmother, then comes up with a wildly creative origin story that has absolutely no connection the Mar-Vell or the Kree at all.

I could see Natalie Dorman's  "Captain America" character as the grandmother of Carol Danvers without much adjustment of the Marvel Comics cannon at all. Carol joined the Air Force in rebellion do her mail chauvinist father. The character in the movie was a private in the US Army. She could have advanced in rank and been an inspiration to Carol. In the comics Carol took inspiration from groundbreaking, pioneering female test pilots of WWII and the Cold War era. So it could happen.

But they haven't even written the script yet! No casting decisions have been announced yet! Ah, what the heck. The 'em dream! It gives them something to do, and gives the movie studio free publicity, which will help the project, and that will give a few people steady jobs for a while.

In the category of "someone is WRONG on the internet," there is always someone out there who refers to Carol Danvers' original superhero name as "Miss Marvel" or Mrs. Marvel. As a good and loyal fan, I of course, do my best to set that record straight.

Someone in there complained about all the non-American actors playing superheroes. I think that could be a touchy subject. Or not. On the one hand, the director and producer of a movie would ant the best actor for the job, and if the best actor happens to have not been born in America, so what? On the other hand, is having an English person portray an American like having a white person play a black person (in the now-acknowledged-to-be-bad genre of "blackface")? Are nationalities akin to races? Or is it more like drag, putting on the clothes and mannerisms of the "other?" Or does it really matter Does it all just go back to what actor can do the best job?
Posted by Captain Zorikh at 6:43 AM No comments: 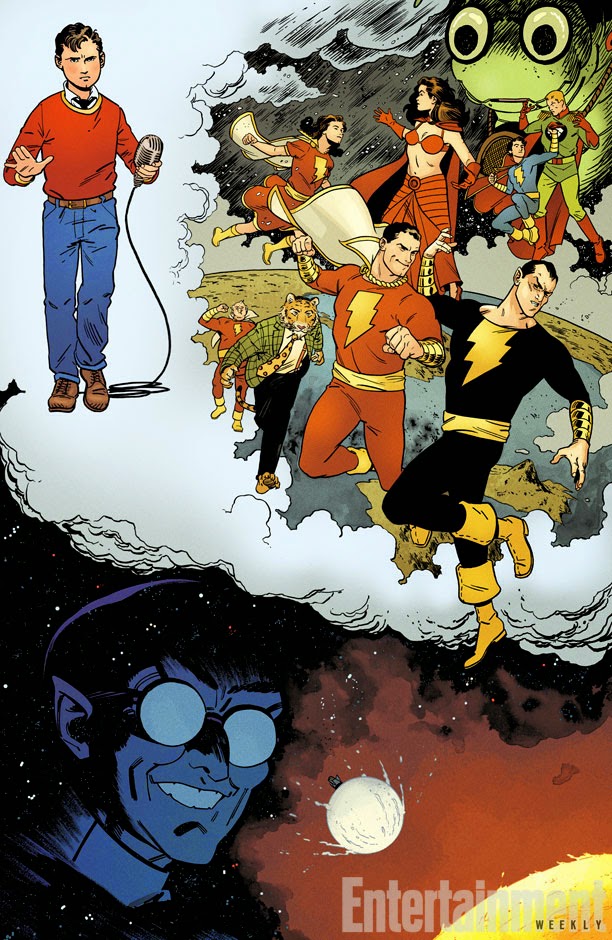 DC Comics has just announced an appearance of the "Earth S" Captain Marvel, the original from Fawcett publications 1940-1953 and DC Comics 1973-1986.

This will come as part of the "DC Convergence" event in which many of the universes created by DC Comics, including those of characters from other comics companies that DC has acquired, the alternate universes that explained the difference between "Golden Age" and "Silver Age" characters, the post "Crisis on Infinite Earths" universe, their many "Elsewords" universes, and the "New 52." I week 4, there will be ten titles released, each of which involves the crossover of two universes. Of interest to this blog is the title "Shazam!"

In this issue, the original Captain Marvel will crossover with the world of "Gotham by Gaslight," a gothic/steampunk word of a late Victorian era Batman.

This is not completely out of the realm of something that the Big Red Cheese would do. Many times in the Fawcett years did the hero, and many times Mary and Junior too, travel through time. The contrast of the "sunny" Captain Marvel with the dark, brooding Batman should prove to be an interesting combination, and if the preview art is to be believed, it looks like we will be seeing the rest of the Marvel Family as well as Mr. Tawny, and favorite villains like Black Adam, Mr. Mind, Captain Nazi, and Dr. Sivana. There is also one female villain that I don't recognize. Am I missing her from my knowledge of the original Fawcett universe, or is DC creating a new villain for this story?

The preview listing is the eighth title down on this page...
http://www.newsarama.com/22861-dc-s-convergence-week-four-pre-crisis-multiverse-is-back-baby.html

Posted by Captain Zorikh at 1:48 PM No comments:

Shazam movie to be part of DC Cinematic Universe?

Around Christmastime the news came out that yes, Virginia, the new "Shazam" movie (which may or may ot have a hero in it named Captain Marvel) WILL be a part of the shared continuity of the curent slate of DC Comics' superhero movies. There had been thought that is would be separate, as "Earth S" was from the regular universes of DC superheroes before the Crisis on Infinite Earths in 1986. The fact that it was being produce by New Lne Pictures and that it had been said that it would have a "lighter tone" than other superhero movies seemed to confirm that. But now, officially, t looks like the same planet with Metropolis and Gotham, will also have an orphan newsboy who meets a n ancient wizard (unless they change that part of his origin story).

And herre is the blog post from DC that appears to announce the news: