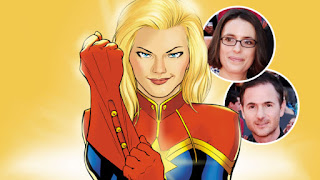 The news is that Marvel Studio's Captain Marvel has found its director! It is actually going to be a directorial team, that of Anna Boden and Ryan Fleck, known for their work on such films as 2006’s Half Nelson, starring Ryan Gosling, 2008's Sugar, starring Algenis Perez solo, 2011’s It’s Kind of a Funny Story, with Zach Galifianakis, and 2015’s Mississippi Grind, starring Ryan Reynolds (note how by including the dates and stars you can draw more search-engine attention). I have not seen any of these movies, not really even heard of them. I guess I have to see a few of these movies to form an educated opinion about their style.

Ashley Rodriguez of Quartz Media has given the most detailed analysis of the duo's previous work, and certainly is the most supportive and optimistic about the potential of their work in this movie. Silas Lesnick of ComingSoon gave the most specific description of why their previous work made them good candidates for this job. Michael Cavena of the Chicago Tribune pointed out they they had worked with superhero movie actors before, including Ryan Reynolds (Deadpool, Green Lantern) and Ben Mendelsohn (The Dark Knight Returns) in Mississippi Grind. They failed to mention Anthony Mackie (Captain America: Winter Soldier), in Half Nelson, but Kat Stubing, writing for Outer Places, did not.

Stubing also pointed out that other non-superhero/action/sci-fi/etc directors have done superhero movies, specifically the Russo Brothers (the TV series Arrested Development) on two Captain America movies. There is no argument that those were successful, both creatively, commercially, and as "superhero movies."

One thing I have noticed, though, is that bringing in a non-superhero/fantasy/adventure director into the superhero genre has its risks. Ang Lee, who made a big splash when after directing such art house fare as Eat Drink Man Woman he introduced the arthouse crowd to kung fu flicks with Crouching Tiger, Hidden Dragon, crafted a slow-paced (if visually interesting) treatsie on child abuse called The Hulk. So far, this is the only Marvel Cinematic Universe movie that has not spawned a direct sequel. Kenneth Brannagh, who made his career doing Shakespeare on film, seemed like an inspired choice for Thor, but despite certain thematic similarities to Shakespeare's multi-play saga of Prince Hal/Henry V, and the comic book tradition of the thunder god speaking in "Shakespearean English," this effort did not quite match the power and intensity of his Henry V, and he did not return for  the sequel.

On the other hand, an artist to trying a new genre in their medium has a tendency to attract attention.

The first "breaker" of the story of the director announcement appears to have been Variety, as most of the first wave of clickbait basically re-hash the facts in Variety's article. The better ones put a few opinions in and flesh out the background of the new directors and the history of the project.

Hollywood Reporter and WhereToWatch, for instance, included the info that among those considered were Lesli Linka Glatter (Homeland), Lorene Scafaria (The Meddler), Niki Caro (Whale Rider, The Zookeeper’s Wife), Lucia Aniello (Rough Night), Sam Taylor-Johnson (F.ifty Shades of Grey),  Jennifer Kent (The Babadook) and Jennifer Yuh (Kung Fu Panda 2). They did not mention Angelina Jolie, proving either a: That she had been an unsubstantiated rumor all along or b: They were not trying to draw her fans in with clickbait.  But James Whitbrook of Gizmodo did.

THe Hundustan Times actually posted trailers for two of the team's previous movies, Half Nelson and Mississippi Grind.

This writer on Makers went a little overboard, I think, with the hyperbole on the excitement over the high degree of estrogen involved in this film, judging by the Tweets she posted.

Then some follow-up news happened (to be continued)...


PS: To make sue the search engines find this when looking for this movie, the writers are Meg LeFauve and Nicole Perlman, Captain Marvel is being played by Brie Larsen, and Kevin Feige is the chief of Marvel Studios.

Posted by Captain Zorikh at 2:07 AM No comments:

RUMOR ALERT! Post on Reddit, Dwayne Johnson Interview Lead to Inferences that "Shazam!" Movie is Cancelled, Black Adam will be in "Man of Steel 2," More.

It seems to have started with a post on Reddit, one that was denied on Twitter, but built upon by an interview on MTV and now the future of the Shazam! hero and related characters in the movies appears to be some thing like this:

Black Adam, played by Dwayne Johnson, is definitely going to appear in movies.

Black Adam will probably have his own stand-alone movie.

Black Adam might face Superman in "Man of Steel 2."

The "Shazam!" movie might be "off the table," but might still happen, depending on how you interpret the anonymous sources and Dwayne Johnson's interviews.

Captain Marvel or Shazam (whichever version of the hero they decide to use) might or might not appear in anything currently scheduled.

Billy Batson might appear as an "Easter Egg" in something.

As a fan of the Big Red Cheese, I have been hoping for not just a Captain Marvel movie, but a GOOD Captain Marvel movie since one was first announced back in 2003. However, from what little I have read of the scripts that have been written, seen what has been done with the character in the comics, and what I have experienced of what happens to superheroes in movies, it is likely that the concept of the character will be used as a jumping-off point rather than the material of the character be adapted into a good movie.

If that is the case, I won't mind if Black Adam gets all the press and screen time. But maybe, just maybe, someone will figure out a way to handle the character as he deserves. Something like the purity of Captain America with the sense of fun of Ant Man and the youthful enthusiasm of the latest Spider-Man. I know those are all Marvel characters, but it would be a breath of fresh air to bring that sort of stuff into the DC Cinematic Universe.

One thing is pretty much certain: If and when he does come to the big screen, Billy Bsatson/Captain Marvel will be a boy who transforms  into a grown-up superhero, but keeps his own mind. That has been the standard interpretation since Roy Thomas wrote "Shazam! A New Beginning" in 1986, and it has stuck. I liked the original concept, that the boy and the hero were two distinct personalities with shared memories, but that is just too confusing for today's audiences.