As my busy life and propensity for verbosity does not allow me to be Johnny-on-the-spot with these posts about late-breaking developments, I am just going to throw this one up here now with minimal commentary and ...maybe...get back to it later.

But for the record, CinemaBlend has collected all the confirmed "heroes and villains" for the upcoming "Captain Marvel" movie from Marvel Studios.

A quick scan confirms the usual, Carol Danvers, Mar-Vell, Nick Fury. It does add a wrinkle I had not considered, the black female character played by Lashana Lynch may be a mother, and her daughter may turn out to be Monica Rambeau, which I think would be a nice touch.

Ben Mendelsohn may or may not be playing Yon-Rogg, and though that character has been drawn several different ways, I think his face would fit. I also think his performance in "Star Wars: Rogue One" had a bit of what I imagine the Kree colonel's character to be.

Flashback to Carol Danvers' youth might reveal McKenna Grace as her young self, which could be nice. CArol Danvers' character is no Superman (at least in the classic, Silver-to-modern age,  Christopher Reeve version). Rather than being a person grown up with a wholesome, supportive family and easily ensconced in a respectable, journalism job, she rebelled against her MCP father and joined the Air Force. Her job in journalism was stormy and tempestuous, as her boss objected to her vision of the magazine for which she was hired as editor in chief, and she is constantly striving to push beyond her abilities as a superhero, and what people expect of her as a person, and as a female person. Showing some of that backstory could set up some interesting, non-traditional struggles for a superhero.

I like that Minn-Erva (being played by Gemma Chan), Ronan the Accuser (Lee Pace), and Mar-Vell (Jude Law) are all in the movie. That indicates we are going to have some real Kree intrigue, and that is what the first couple of years of Marvel's first Captain Marvel was all about.

I suppose I can go into  more detail later about what all this means, but I do want to point out this picture which I presume is from that recent gorilla movie, that illustrated Brie Larsen's entry in the article: 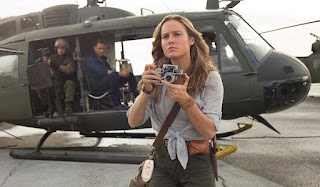 Note the shirt, open but knotted, indicating a casual sexiness, yet practicality. Carol Danvers wore a shirt like that once. I will scan some pictures from that issue, post it, and talk about it later.
Posted by Captain Zorikh at 9:49 AM 1 comment:

I was going to write a big, thoughtful post about this, and even created this image to illustrate it: 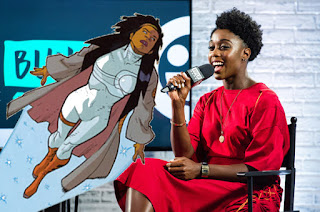 And started building the "clickbait roundup":

I even found this video...

One black actress has pulled out of Marvel's "Captain Marvel" movie, and another taken her place. There has been a lot of race-changing between comics and movies, but with a black female Captain Marvel having been in the comics, and considering the ways that superhero movies these days pay a lot of fan service, having a black woman in a Captain Marvel movie by Marvel is a pretty dead giveaway that Monica Rambeau is going to be in this movie.

The rest of this post would have been about how I first saw Minica Rambeau on the cover o that isue of The Amazing Spider-Man in a magazinse shop on 1st ave & 57th St, but rejected it becaus she was not my Captain Marvel, but how when I came to read all her adventures with the Avengers in research for this project, came to realize that she was an awesome character. She was brave, realistic, and actually studied up on all the Avengers' villains so she could battle them efectively. In many ways she was a better "feminist role model" than Carol Danvers' Ms.Marvel when she first appeared.

It's a shame that Marvel had to bring back Captain America to the Avengers at her expense, and that she never had a regular series of her own.

I will just close with this video which, for the record, tells the story of the Death of Mar-Vel and the coming of Monica Rambeau, including some things that made her unique...


Posted by Captain Zorikh at 8:51 PM No comments: