The New Beginning for SHAZAM! (Part 12 of the Blog history of ALL the Captain Marvels!)

As we saw in our previous chapter, DC's Crisis on Infinite Earths combined all the heroes on all its alternate universes into one Earth. This enabled them to reboot the entire history of the DC Universe to incorporate the characters of different companies, like Quality and Charlton, that DC had acquired or, like Fawcett, licensed, into one great big world. This meant some interesting shoe-horning and establishing of relationships between characters who had never met before. It also meant that they had to create new versions of their great "trinity" of Superman, Batman, and Wonder Woman. Whereas in the previous Multiverse there were older and newer versions of these iconic heroes on different Earths, now all three were established as having first appeared in modern times, while all the other older superheroes were established as just that, older superheroes, and in many cases, inspirations for the new ones.


I could go on about the significance of this and the nuances and quirks that this created, but we are here to look at just one aspect of this: how it affected the original Captain Marvel.

Roy Thomas, a big fan of the World's Mightiest Mortal, had a clause in his contract that said that he would get first crack at any new Captain Marvel project. Now was his chance to do what he had always wanted!

When DC licensed the Big Red Cheese in 1972, it was decided to put him into his own universe, Earth-S, for reasons that included the fact that he was drawn and written so differently from DC's other comics. Now that he was rolled into the regular DC universe, his origin had to be told again. It was told in a four-issue mini-series titled SHAZAM! The New Beginning (April - July 1987) 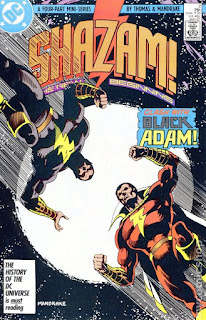 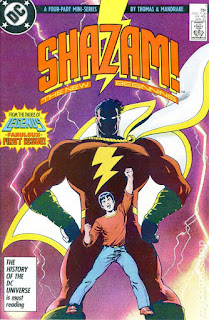 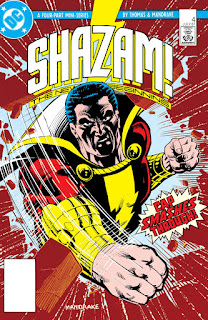 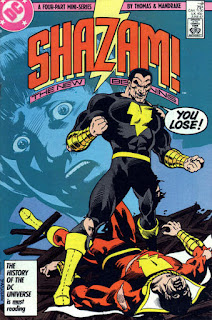 In this version, written by (Thomas and drawn by Tom Mandrake), Billy lived in San Francisco; the story began with his (unnamed) parents being killed in an auto accident; Uncle Dudley and Dr. Sivana were both Billy's real uncles; Sivana used his kids, Magnificus and Beautea, to trick Billy into choosing him as his new guardian so he could access Billy's father's assets to help his research (he actually arranged the deaths of Billy's parents); and Sivana managed to summon Black Adam from some other dimension. 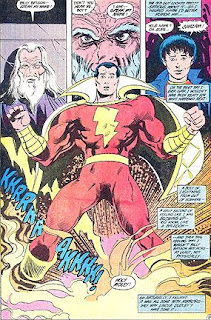 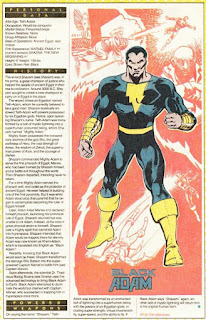 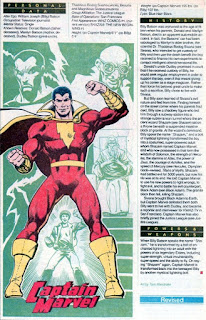 But of all the differences between this version of Billy Batson/Captain Marvel and the original, the most definitive was that when Billy said the magic word to transform, his mind stayed in the hero's body. His personality did not change to that of a grown man. It is this one change that has stuck with all versions of the character since then (with the exceptions of Jeff Smith's and Earth-5, but we will get to that). It has also become the default assumption of this hero's character to this day.

The effect of this constant personality meant that Billy's passions remained intact when he was a superhero, so his fascination with his new powers affected his initial use of them, and his reaction to meeting Black Adam was that of an enthusiastic juvenile, rather than a grown man with the wisdom of Solomon.

And of course, this being being a new era of "grim & gritty" comics, Captain Marvel's costume had a lot of dark shadows and his driving motivation was that of a dark avenger. This was a big change from the light-hearted, whimsical stories that had been the hallmark of the Big Red Cheese up until then.

Fan reaction was mixed. some liked the new look and feel, others did not. Sales numbers, however, were positive; enough, at least to warrant an ongoing series.

He was a featured hero in the mini-series Legends, written by John Ostrander and Len Wein and drawn by John Byrne, placing him in the forefront of the new lineup of leading superheroes for the new, post-Crisis DC world. He also was a member of the new Justice League team, where his juvenile personality was played for comedy, and the new, "dark avenger" personality was forgotten. 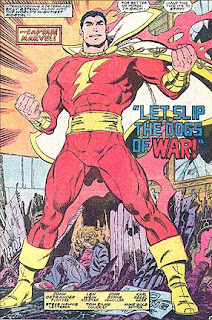 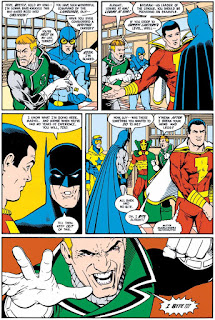 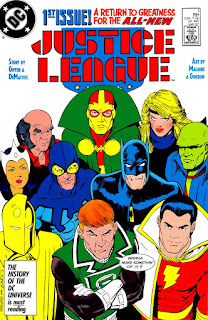 A new, four-part miniseries dealing with neo-Nazis appeared as a backup in Adventure Comics, with a tag at the end promoting a new SHAZAM! ongoing series.

There was a regular series planned and plotted by Roy Thomas. Several issues were scripted. Mary Marvel would be a punk chick older than billy and unrelated. Freddy Freeman would be a black teenage boy in a wheelchair.

The first issue was completely redrawn at least three times, each time  by a different artist and each time not coming up to DC standards. Work was done on the next few issues as well, but somehow, DC dropped the ball on this. The project was never completed, and roy thomas' contract expired.

Coming soon: THE POWER of SHAZAM!
Also: THE LEGACY of GENIS-VELL!

Posted by Captain Zorikh at 3:19 AM