IT'S OFFICIAL! ZACHARY LEVI AS THE HERO OF "SHAZAM!" (Captain Marvel?)!

Hi Friends. I am sitting on a Greyhound but to the Armored Combat League's New World Cup, where I am going to be doing the play-by-play of the live streamcast, and I forgot to bring my laptop charger, so I am going to have to make this brief.

The role of the hero of the "Shazam!" movie has been cast, and it is someone who shares my initials: Zachary Levy! 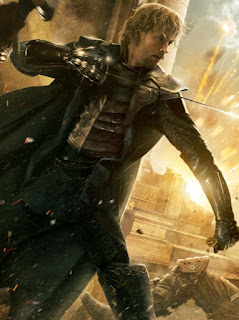 Zachary Levy starred as a reluctant secret agent in the successful TV series "Chuck" (of which I had a T-shirt that I got at San Diego Comic Con years ago. Wish I still had it. It has just gone up in value in my esteem) and played Fandral the Dashing in the "Thor" movies. He was also in such movies as TV shows at "Heroes Reborn," "Tangled," and "Alvin and the Chipmunks." He's got the eyebrows and the smile, but is going to have to go on a Christopher Reeve-style bodybuilding program to match the traditional build of the World's Mightiest Mortal.

You will notice I did not call the hero "Captain Marvel" right of the bat. There is still some confusion and ambiguity as to whether that will be the hero's name in the movie. Most of director David F. Sandberg's Instagram lg of his production process has shown the traditional Fawcett-DC version of Captain Marvel, but one New 52 "Shazam" action figure did show up. The clickbait press has been reporting that the "Seven Deadly Sins" may be a villain and that characters that may be the adoptive family of Billy Batson in the New 52 have been showing up in casting notices.

I did talk with Dan Didio at NY Comic Con about this briefly, and I will be making a video with his answer to the question soon. It may shock some people!

But until I see a piece of footage or read a bit of script in which the hero is named, I will continue to be ambiguous and hold out for the classic version of the Big Red Cheese.

And now, the traditional "clickbait roundup" of the story:
It all started here:
Variety

That's all I have time for today. Keep an eye on this post, for I will update it with more clickbait links this weekend!
Posted by Captain Zorikh at 5:13 AM 3 comments: