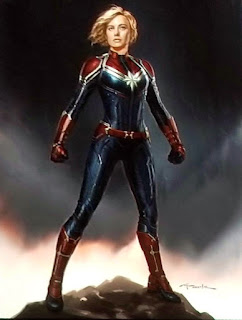 This is a story that is no doubt all over the Interwebs and has engendered enough clickbait to run the stream dry, but I have been out of tow for a week and a half since the news broke and I only havetime to post this one link from Cinema Blend:

What Brie Larson May Look Like As Captain Marvel

As you can see from the picture, most of the design is a direct copy from the comics. The most notable differences are the belt and the fact that it appears to be armored (which brings up the question: If she is supposed to be nigh-invulnerable, why does she need an armored costume?).

From announcements at San Diego Comic Con we know that the story will take place in the 1990's and that the Skrulls (a race of shape-shifting aliens who are the adversaries of the Kree) will be involved. This opens up the possibility that the story may be based, at least in part, on the Kree-Skrull War Saga (in which Captain Mar-Vel, the Kree warrior who was involved in the incident that gave Carol Danvers her superpowers, was deeply involved), or the Secret Invasion (in which Danvers did not play a leading role, but a time-displaced Mar-Vell seemed to appear and play a pivotal role).

It was also announced that Samuel L. Jackson would return as Nick Fury, but with two functional eyes. I guess this means that this Nick Fury did not lose his eye in WWII, as did the original white one in the comics.

Incidentally, for those keeping track of such things, lots of writers are calling this something that makes it sound like this will be the first movie about a female superhero. Pay close attention to the specific wording. There was a Supergirl movie starring Helen Slater and Faye Dunaway in the 1980's, but that was DC, not Marvel. There was also the Catwoman movie in the 1990's with Halle Berry, but it was neither Marvel, nor was it about a superhero. There was an Elektra movie in the 2000's, but that was not part of the Marvel Cinematic Universe, was not a "blockbuster" hit, and the character was more of an anti-hero than a superhero. Then, of course, there was the recent Wonder Woman movie, still in theaters (last I checked).

So that makes Marvel's "Captain Marvel" the first MCU theatrical movie with a female superhero lead. There. I'm glad we got that settled.