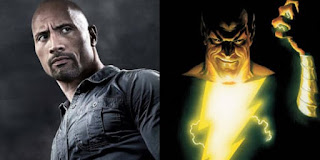 Well, it looks like the clickbait press has stumbled on some actual news regarding a Captain Marvel-related movie!

As we all know, "Shazam!" is scheduled for an April 5th, 2019 release, and will star Dwayne Johnson (the pro wrestler known as "The Rock") as Black Adam, who has been the most powerful super-villain in the DC universe, and whose origin is tied in with that of the original Captain Marvel.

A few weeks ago this picture of Johnson and Superman actor Henry Cavill popped up on Cavill's Instagram with a hashtag #DCworldscollide. Since word had been out that Black Adam may appear in a Justice League movie before "Shazam!", it led to speculation that Superman and Black Adam would fight in an upcoming movie.

Johnson had been tweeting about important meetings with movie execs with similarly enticing hashtags, but this news of a Black Adam movie is a big deal, and not a little unexpected.

This would be the first comic book superhero movie headlined by a "bad guy." Of course, Black Adam was somewhat morally ambiguous during much of his run from "Power of Shazam" through the end of the post-Crisis on Infinite Earths, post-Zero Hour universe. This has carried over somewhat in DC's New 52, though with far less subtlety and complexity. It would also be the first time The Rock has been a bad guy on screen, not just in the ring.

There have been at least five versions of the character so far. There was the original, from Fawcett, revived by DC in the 1970's who was unambiguously a bad guy, then the one that appeared in Roy Thomas' "Shazam! A New Beginning," also a bad guy. The one that Jerry Ordway created for "Power of Shazam!" spent time on both sides of the good guy-bad guy divide, which side he was on often depending on your point of view. In the youth-oriented "Billy Batson and the Magic of Shazam" Adam was an emo kid, the kind of villain whose main motivation is revenge. Now the New 52 has maintained that "point-of-view villainy" (the kind where if it were 5000 years ago in Egypt you might think hm a hero, but now he is just mean and sadistic).

Which of these versions of the character the movies will present is unclear, though the "PoS" version is the most currently famous. However, Johnson has talked about how the character is so interesting because he used to be a slave. It is only the New 52 version that had been a slave. It was interesting when Johnson said this because the New 52 was still very new at the time.

In all likelihood, the movie version will be its own animal, with bits adapted from New 52 and PoS. Johnson has talked about bringing "fun" back into the DC universe. This seems kind of odd to attach to Black Adam, as the character was part of arguably the darkest moments in DC comics, history, such as when he murdered an entire country in revenge for the death of his wife.

It's obviously too son for them to say when this now picture will be released, or even if it will come out before or after "Shazam!" some reports are calling it a "spinoff," others that the "Shazam!" movie will now be in two parts. But in any event, it shows that a strong character, with a popular actor to play him, can lead to drastic changes in a movie studio's plan.

Here is your abbreviated (because I don't have time for more) "clickbait roundup":

The Hollywood Reporter (I think on this website it actually counts as "news.")
Variety
IGN
Screen Rant
Den of Geek
Rotten Tomatoes
TheMarvelIncBlog (I posted a lengthy comment on this one)
Uproxx
RealityTVWorld
Deadline Hollywood
Inverse


Posted by Captain Zorikh at 2:25 PM No comments: