Shazam! Movie Update: The Hero Will Be...

John Cena and Joshua Sasse are front-runners for the role of Captain Marvel in the "Shazam!" movie! Billy Batson's character description is out! A script has been written and the plot synopsis is out!

Yes, folks, that is what the clickbait media are saying, and I have just done my service to my click-count by putting all the keywords in the first paragraph.

So let's start with the big news first: The hero's name. Back in 2007, DC pretty much gave up the fight of having a superhero with a name that could not be put on the cover of the book. The trouble (as regular readers of this blog and viewers of the associated YouTube channel and members and followers of the associated Yahoo and Facebook groups and Facebook page know) is that when DC licensed the original Captain Marvel from Fawcett Publications, Marvel Comics had trademarked the name "Captain Marvel," so DC decided to title the comic book for this character "SHAZAM!" (all caps, with the exclamation point). Shazam has since been used as the trademark for all merchandise, properties, and productions surrounding and involving this character. It is therefore understandable that people who would never read the book, watch the TV show, or play the video game would never know that the hero's name was really Captain Marvel.

So as part of a company-wide crossover event, Captain Marvel underwent a transformation in which he became a sort of "guardian of magic" character on the Rock of Eternity with the title "Lord Marvel," and his role on Earth was taken over by the former Captain Marvel, Jr, Freddy Freeman. He had recently lost his powers, however, and to gain them back he had to undergo a series of trials chronicled in the 12-part series "The Tirials of Shazam." At the end of that series , Freddy emerged in the classic red suit with the superhero name that matched the acronym of the source of his powers, Solomon, Hercules, Apollo (who replaced Atlas after he was killed), Zeus, Achilles, and Mercury; SHAZAM!

Dan Didio himself confided to me how relieved he was that at last they have a hero whose name is the same as the title.

That turned out to be temporary, however. The old wizard named Shazam, whom everyone thought was dead, returned and took his name back, and Freddy was now the new Captain Marvel.

But before anything else could happen it was 2012, and CD came out with the New 52, reinventing all their characters, some more than others. In the case of Captain Marvel, his powers changed, his origin changed, his costume changed, and his name was now "Shazam."

Of course conspiracy theorists, semi-fans, and other folks who have not had the good fortune of growing up with this character and having researched the legal history and ins-and-outs of the trademark and copyright and other issues going on, started assuming things like it was now illegal to call Captain Marvel Captain Marvel, or that Marvel Comics had sued, or any number of other reasons why the change happened. So the next thing you know, there were YouTube videos proclaiming to tell the "History of Shazam" and talking about the character as if he used to have the name "Captain Marvel."

Just to make things more confusing, the universe of the "New 52" turned out to be part of a multiverse of 52 universes, one of which (Earth-5) was the home of the original Captain Marvel.

Then, in 2014, Dwayne (the Rock) Johnson broke the news that the Shazam! movie project was up and running again (you can read back through my previous posts to follow the history of its first incarnation from 2003 - 2009). There was a resurgence of interest in the character, with a concurrent surge in YouTube videos and clickbait articles about him, along with the usual casting rumors and speculation. With each of those videos and articles was, either in the content or in the comments (usually both) something not 100% accurate about the history of the character and his ownership and where the rights lay regarding the character's name and its use.

One thing was never made clear, though, either by accident, design, or legal obligation: What would the name of the hero if this new movie be? Most reports of the movie would use the New 52 character's name, as it was the same as the the title of the movie and besides, either the writers never knew the name as anything different, or they assumed that the name had been changed for good. Illustrations representing the character would be of both the New 52's "Shazam" and the classically-based Captain Marvel. Moreover, since there had been several reboots of the character since 1986, much of the material available was of these reboots, and not the original character. This made for some interesting mish-mashes from those who did not know their history.

So as people would be saying "He will always be Captain Marvel to me!" and "Get over it, it's illegal for DC to use that name!" and so on, I would chime in, pointing out that the studio had not yet said whether the hero would be the New 52 version,named "Shazam," or based on the original, and named "Captain Marvel."

Well, if the words released by thathashtagshow are to be believed as genuine, it looks like they have decided. Below are the "plot synopsis" for the movie and casting notice for Billy Batson:

"Based on the DC Comics character “Shazam!” Billy Batson becomes Captain Marvel, the world’s mightiest mortal, when he says the magic word “Shazam! The name is an acronym for six gods and heroes of the ancient world as well as their attributes. The wisdom of Solomon, strength of Hercules, stamina of Atlas, power of Zeus, courage of Achilles and speed of Mercury."

"Male, 12-15 years old. A teenager who becomes Captain Marvel, the world’s mightiest mortal. Granted access to incredible powers by the wizard Shazam, he speaks the wizard’s name and is struck by a lightning bolt that gives him the powers of the gods."

If that  isn't enough evidence, the director, David F. Sandberg, has been posting a picture each day in his Instagram page, and here is the latest... 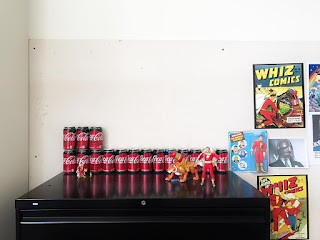 Not a "New 52" to be seen! Nor a "New Beginning," a "Power of..." a "Magic of..." or even a "With One Magic Word..."! Just classic, Fawcett Captain Marvel comics, a couple of action figures of the classic Cap, a tiger, a worm, and a bunch of cans of Coke Zero. And a picture of the King of Sweden. In a Viking helmet.

There is a nifty in-depth analysis of the picture by Mark Siefert at BleedingCool.

Whatever else this says, it does not say "New 52." It says CAPTAIN MARVEL!

Next: About those casting rumors, plot details, and possible connections to "Flashpoint"...
Posted by Captain Zorikh at 12:41 AM No comments: