MARVELS and RUINS of the KINGDOM of ROSS! Blog History of the Many Captain Marvels Part 17!

The 1970's had been an era of creative exploration at DC and Marvel Comics because of the new directions pop culture was going at the time the generational change in editorial staffs, and some works of real genius wound up on the stands. The 1980's was an explosion of creative possibilities in the independent comics scene as brand new comic book companies gave creators full ownership of their properties and had no Comics Code Authority to censor their work.

Here is an interesting dialogue-style history of the Comics Code Authority from NPR.

The 1990's, however, incubated creativity through the need to come up with the next big, flashy, collectible "thing" that would prove to be a groundbreaking triumph and raise the bar for the comic book industry. Alternate covers! New first editions! Exciting new changes to characters! Foil-embossed! Polybagged with a trading card! Pogz!

The success in the late 1970's and '80's of comics that broke ground creatively and in format while referencing or reinventing familiar superheroes and other comic tropes (Dave Sim's Cerebus the Aardvark, Eastman & Laird's Teenage Mutant Ninja Turtles, Frank Miller's Ronin and The Dark Knight Returns, Alan Moore and Dave Gibbons' Watchmen) and works that re-set or re-organized the superhero universes of Marvel's and DC's superheroes (Marvel's Secret Wars, DC's Crisis on Infinite Earths) had established precedent for what was thought to be needed to have a popular, top-selling comic book.

The work that may well have had the most success as a creative re-imagination of a superhero universe, comic book format, and gimmicky concept and packaging, was 1994's Marvels limited series, by writer Kurt Busiek and artist Alex Ross (that is, the artist Alex Ross, not the music critic Alex Ross). 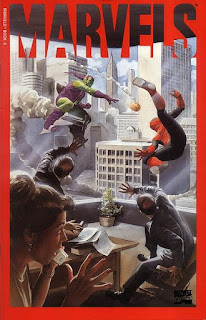 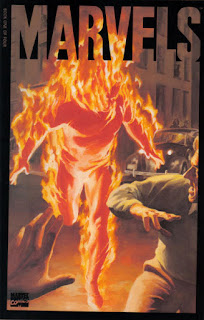 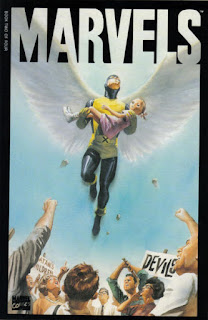 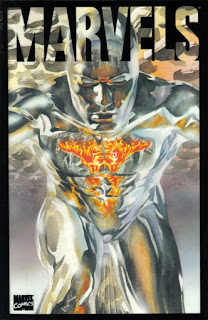 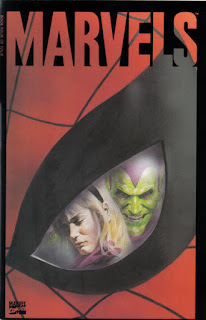 This series re-told the history of the Marvel Comics characters from before WWII up to the present day, but through the eyes of a news photographer, who called them "Marvels" (hence the title). The only Captain Marvel who appeared was Mar-Vell, who was in one double-page spread of the Kree-Skrull war, but The impact of this series, with its deluxe format and gloriously painted covers, was to become a superhero comic book benchmark.


This comic totally changed the game. Alex Ross set a new visual standard with his realistic painting, often compared with Norman Rockwell (he used models). The cover was a clear acetate sheet with a black border and the title framing the cover painting on the page beneath it. From thence on, the look of an Alex Ross-painted comic book, or even a book with his painted cover, would be seen as a mark of high quality epic storytelling.

The most directly-referencing work was a dark satire titled Ruins (written by Warren Ellis, painted art by Terese Nielsen, Cliff Nielsen, and Chris Moeller), in which everything that could have gone wrong with the Marvel superheroes did. In the case of Mar-Vell, he was part of a Kree invasion force that, due to a mishap involving the Silver Surfer, fell prey to American nuclear missiles that wiped out 90% of the force. They were captured and put in concentration camps in a former nuclear testing base.These last survivors and their children were slowly and painfully dying of radiation poisoning, and Mar-Vell was especially miserable, as his objection to the invasion was blamed for its failure. 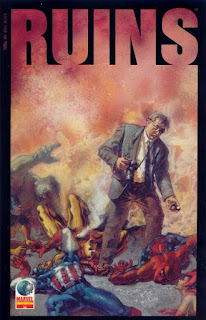 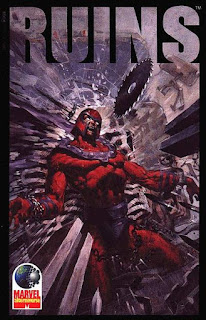 Another, and much more well-known and impactful conceptual follow-up was from DC Comics in 1996, a vision of a dystopian superhero-deconstructionist future titled Kingdom Come, by writer Mark Waid and writer/artist Alex Ross. This story turned out to be the greatest use of the human/hero dichotomy of the original Captain Marvel ever. 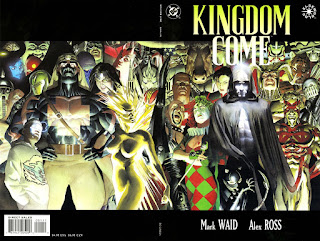 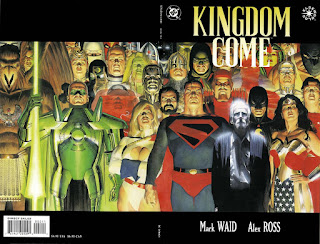 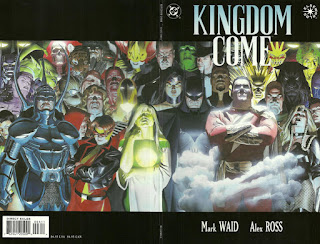 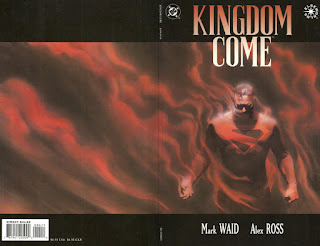 Based on an idea Alex Ross imagined while working on Marvels and set in he hear future, super-powered being filled the skies and streets of cities having near-apocalyptic battles every day. Superman had retired to his family farm in Kansas, and Lex Luthor was organizing a movement against super-powered heroes. His personal bodyguard was Captain Marvel, dressed in a suit, standing quietly behind him lighting his cigar when needed. The threat of his power is enough to keep all other superheroes at bay.

A tragically destructive incident in a hero-villain battle brings Superman out of retirement, recruiting other superheroes to become the world's police and arresting and detaining those who decline or resist. Batman leads a resistance to this and teams with Luthor. I turns out, though that "Captain Marvel" is really a grown-up Billy Batson, brainwashed and mind-controlled by Luthor into believing that super-powered heroes are evil monsters. The climax occurs during a final, apocalyptic battle between all the superheroes and villains, and Billy Batson/Captain Marvel has the choice of either allowing them to all be destroyed (by a United Nations-launched nuclear weapon) or allow them to survive,  their conflict to continue, and thus doom humankind.

It is Superman who gives him this choice, the reason being that because he has seen life from both the normal human and super-powered perspectives, Billy Batson/Captain Marvel (along with  the wisdom of Solomon) is uniquely qualified to pass judgement on the existence of super-powers heroes. His decision sacrificed himself to same a portion of the heroes and inspired Superman to realize that it was the role of superheroes to help, but not lead, humanity to its future. 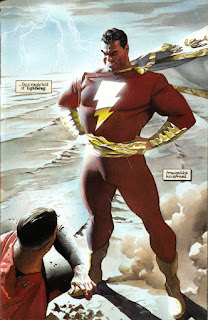 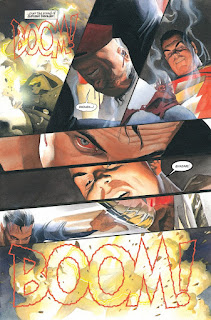 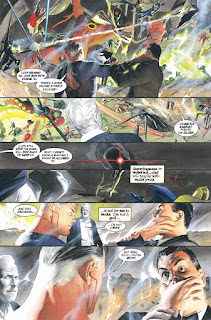 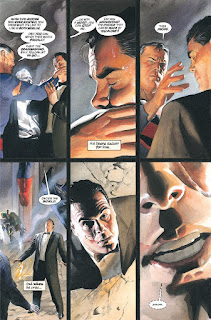 Other members of the Marvel Family were present in future-ized incarnations. Freddy Freeman/Captain Marvel, Jr. was now "King Marvel," with a costume redesigned to evoke an Elvis Presley jumpsuit (a deliberate homage to the King of Rock & Roll, who was a big fan of the Little Blue Cheese). Mary Batson/Mary Marvel was now either "Lady Marvel" or "Queen Marvel" (depending on which fan wiki you read). She and Freddy Freeman were married and had a child, "Whiz," who was the inheritor of the SHAZAM! power. Their family dynamic was obvious in their actions (always visible in the background), but none of these characters were given anything significant to do in the story. 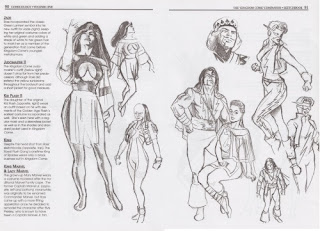 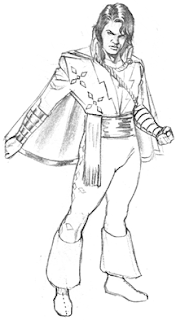 1. Captain Marvel truly was the World's Mightiest Mortal in the DC Universe, able to go toe-to-toe with Superman and with power enough to hold all other heroes at bay. His magic lighting could even be used as a weapon.

2. Alex Ross was a big fan of the original Captain Marvel, and his vision of the character became the most popular iconic image through which the character would be marketed by DC for some time. He has placed the hero in the same level as DC's "Trinity" of Superman, Batman, and Wonder Woman.

Ross had worked on a potential new SHAZAM! series in the very early 1990's.

It never came to pass, being superseded by Jerry Ordway's Power of SHAZAM!, but Ross' star rose with Kingdom Come and other projects. He soon got more assignments designed to take full advantage of his majestic interpretation of comic book superheroes. One such was four tabloid-sized issues, each featuring one hero of DC's Trinity, plus one with the original Captain Marvel. That book was titled SHAZAM! The Power of Hope. 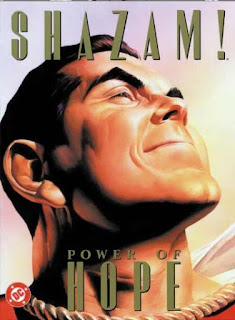 In this gloriously-painted book (written by Paul Dini), what was presented as special and unique about Captain Marvel was that even with his mighty powers, he could still relate to children (being, in his alter ego, a child himself) and give them hope in the midst of despair.

Review of SHAZAM! Power of Hope from Ground Zero Comics.

Ross continued to use the Big Red Cheese as a subject for his art in other publications, and just this year produced this piece, which in one picture sums up the entire focus of my project here: 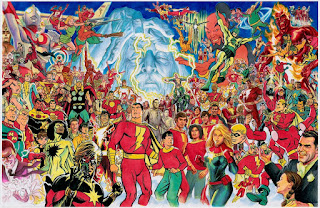 https://nerdist.com/wp-content/uploads/2019/03/echoes_of_shazam_web1200.jpg
How many of these Captain Marvels and Captain Marvel-related characters can you identify?

Posted by Captain Zorikh at 2:48 AM