CAPTAIN AMALGAM! Part 16 of the Blog History of ALL the Captain Marvels! (Contest inside!)

Before we get too far away from the 20th century, there is one short-lived Captain Marvel and several related characters we should mention for the intriguing possibilities of these characters as well as the groundbreaking means by which they were created.

By 1995, the comic book boom had pretty much busted. The excitement engendered by the birth of Image and Valiant Comics, the Death of Superman, and the reveal of the new Batman after Bane broke Bruce Wayne's back had run its course. Sales were dropping, comic book shops were closing, and independent companies were dying off.

Marvel Comics itself, having been acquired by Ronald O. Perelman in 1989, went public that same year, spent hundreds of millions of dollars under Perelmen buying up or into companies that produced toys, stickers, trading cards, and other comic books, and a distribution company, and by 1995 found themselves under mountains of debt.

Since the success of Marvel's Contest of Champions, and Secret Wars, and DC's Crisis on Infinite Earths, company-wide crossover events had become the go-to attempted circulation boosters for both Marvel and DC. Furthermore, comics fandom was always a-chatter with theories and speculation on what would happen if superheroes from the two big rival companies were ever to meet.

With this no doubt in mind, DC and Marvel got together and launched DC Versus Marvel, a crossover between both companies! In this 1996 4-issue miniseries, (with one "#0" free preview giveaway issue), fights were staged between comparable characters of the two companies.. This included Superman vs. The Hulk, Batman vs. Captain America, Aquaman vs. the Sub-Mariner, Wonder Woman vs. Storm, and Captain Marvel vs. Thor. (Marvel Comics' Captain Marvel, still technically Monica Rambeau, only appeared n one panel, and Genis-Vell, the all-but-official inheritor of the title whose comic had recently been cancelled did not appear at all).

There was an extra gimmick to this series, though, that did engender greater reader interest, and that was that for the matches between the bigger names of each company, the winners would be decided by reader vote! For better or worse, however, Captain Marvel vs. Thor was not one of those matches. 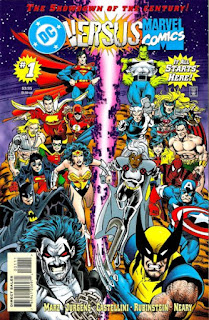 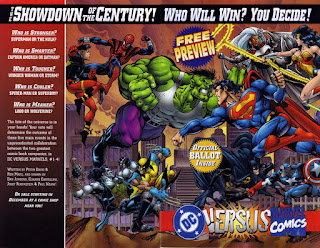 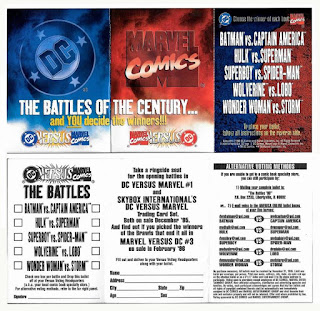 I suppose this was as logical a matchup as one could imagine. Both of them being of godly power and with a lightning and thunder theme. And though they threw in a one-panel gag that acknowledged how one character was a rip-off of the other, DC's Snapper Carr and Marvel's Rick Jones razzed each other. 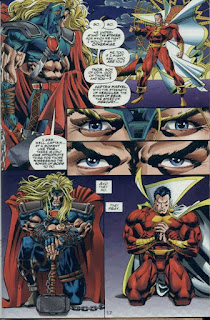 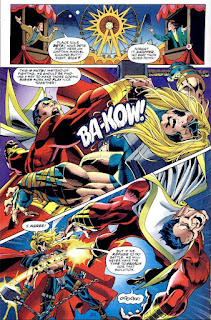 Here is a blow-by-blow breakdown of the Captain Marvel-Thor fight.

The fight was won by Thor in a conclusion some Captain Marvel fans felt unsatisfying. But that was not the last appearance of a Captain Marvel in the DC-Marvel co-production.

The story that contained these battles was extended to bring the two universes, Marvel's and DC's, together in an amalgam not just of the worlds, but of the characters and the companies. Superman and Captain America became "Super Soldier," Batman and Wolverine became "Dark Claw," Wonder Woman and Storm became "Wonder Woman," but looked like Storm in a mashup of her and Wonder Woman's costume, and Captain Marvel and Captain Marvel became..."Captain Marvel." 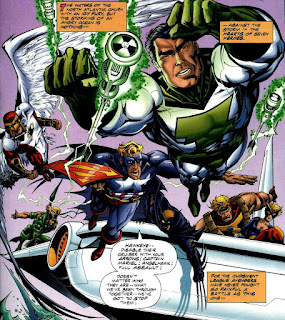 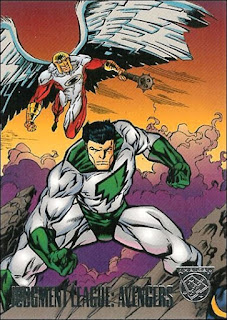 The conceit of the concept was that it was a line of comics called "Amalgam Comics," and that these "amalgamated" heroes had been around all along, in place of the ones with which we were familiar. There were backstories and publishing histories of each character with made-up titles of comics combining titles of existing comics. Captain Marvel fit into this paradigm easily.

Though only seen briefly in two published comic books and a few trading cards, he had a secret identity and backstory. His alter ego was young Billy Mar-Vell, who upon saying the alien word "Kree!" would "super-scientifically" transform into Captain Marvel, with a white suit, green gloves, boots, briefs, and yoke, and green lightning bolt logo on chest. He had powers of super-strength, super-speed, invulnerability, and flight.

As he was only one of a bunch of heroes in "Judgement League: Avengers," he didn't get much to say or do, but he did express disdain and distrust of aliens and "metamutants." This disappointed me, as all other Captain Marvels had actively fought against prejudice in some form or another.

The fictional history of this character included him first appearing in "Whiz Marvels #1,"  being a founding member of the "Judgement League: Avengers" and present in the "Secret Crisis of the Infinity Hour" (a crossover epic that was never really published, but key story points were related in a series of trading cards. the title referenced Marvel's Secret Wars, DC's Crisis on Infinite Earths, the series of Infinity War-related stories from Marvel, and DC's Zero Hour) when "American Girl"  (a pastiche of Ms. Marvel and Supergirl named "Carol Barnes," a combination of Carol Danvers and Bucky Barnes) sacrificed herself to save the universe. 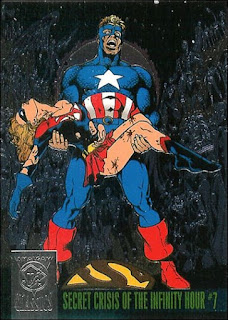 For her part, "American Girl" was a successor to "Super Soldier," the living legend of WWII, and his fellow hero, "American Belle" (herself a pastiche of Marvel's Miss America and DC's Liberty Belle).

And speaking of Carol Danvers, a character by that name was the alter-ego of Amalgam's "Huntress," a former US secret agent super-spy with a crossbow (an amalgam of DC's Huntress and Marvel's Hawkeye, along with elements of Carol Danvers' Marvel Comics history) who filled a sort of "Batwoman" role to Dark Claw. 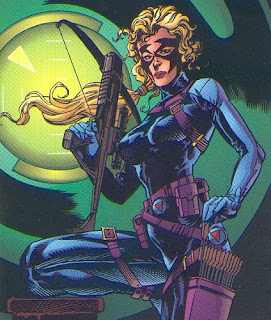 Rick Jones was not left out of this. He appeared in an amalgam with his DC counterpart/inspiration, "Snapper" Carr, as Snapper Jones, a.k.a. "Bismouth," a member of "Magneto's Magnetic Men" who appeared in an eponymous comic. He was super villain, an  amalgam of Tin, a member of DC's Metal Men, and Toad, a member of Marvel's Brotherhood of Evil Mutants.

Apparently, he was created by Magneto, killed, revived, gained sentience, told to live a human life, and became a street musician. 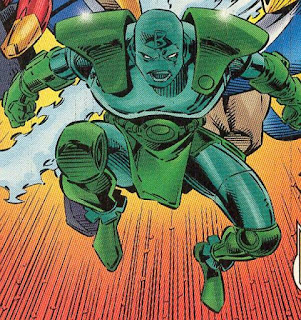 
Another miniseries involving the Amalgams came out in 1997, titled Unlimited Access. In it, the character of "Access," a normal Earth Human who wound up with the power to amalgamate characters from the DC and Marvel universes, created more of these amalgams, only some of them with less apparent relevance between the component characters.

The Captain Marvel-related character here was "Captain America, Jr," (appearing in Unlimited Access #4) whose alter ego, Freddy Rogers, could transform into his hero by shouting "Uncle Sam!" His powers appeared to be based on characteristics of United States presidents, including the strategy of Eisenhower and the trickery of Nixon. He only appeared in this one issue. 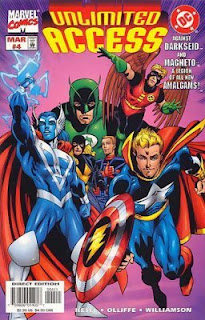 Since this, fans have created a myriad of mashups of superheroes, including several involving one or another or several Captain Marvels. Marvel itself, in NextWave: Agents of H.A.T.E. created a mashup of Monica Rambeau and Mar-Vell that was brilliant in its execution.

But I feel that the Amalgam missed an opportunity here. The original Captain Marvel is one of the all-time great superheroes. He managed to capture an audience at just the right time that wanted to see a hero exactly like him and outsold Superman. His paradigm, the mortal, particularly a child, who could transform by magic into a hero, was the template for many other superheroes, both seriously within the industry and as a trope in everything from advertising to satire.

Furthermore, Marvel's first Captain Marvel was a hero with depth and dimension. He had an uneasy history of persecution and struggle. He even died! Combining this backstory with the sunny, optimistic, eternally-young Billy Batson-Captain Marvel would have been a fascinating challenge.

Amalgamating Billy Batson and Rick Jones would have been interesting. Billy Batson was a radio and TV reporter, Rick Jones a musician. Billy had a youthful fan club, Rick had his "Teen Brigade." Rick Jones was the sidekick of several superheroes over the years. I might have been interesting to have that his backstory be of a young journalism student with musical talent who winds up sickicking for several superheroes before meeting the old wizard Perhaps the boy's experience as a sidekick, his journalistic integrity, and his musical soul would have been a factor the wizard considered in selecting him to be his new champion. And now, as a superhero, it is that experience which informs him in how to use his powers to fight crime, evil and injustice.

Here is where the contest comes in, folks! Design and draw the above mashup of Billy Batson with rick Jones and Captain Marvel with Captain Mar-Vell and post it in the comments below. We will then have a contest where readers an vote on their favorites. The winner will receive a free copy of my three-pamphlet series "Captain Marvel Culture."! :)

On top of all this, there was the cosmic power thing. Mar-Vell gained "cosmic awareness" from the entity Eon, granting him the ability to be universally omniscient. He was aware of all things in the universe. The wizard Shazam resided in the Rock of Eternity, at the nexus of all universes, and from there knew all things. Perhaps some bizarre partnership or mashup-of these two mentor-like figures who granted powers to their heroic proteges could have been explored in this series!

And finally, the big red elephant in the room: Both companies had Captain Marvels, but the original one could not have his name in the title, even though three other companies had plastered that name all over their covers! It would have been a fine and fitting tribute to the legacy of Parker, Beck,  Binder, Schaffenberger, Lee, Colan, Thomas, Kane, Starlin, Gruenwald, Milgrom, Broderick, et al, a symbol of camaraderie between the two companies, and simply, ridiculously appropriate for Amalgam Comics to publish a Captain Marvel comic book.

And with regards to Monica Rambeau, perhaps she could have amalgamated with the light-based DC superhero The Ray to become "Lightray" or something...