"X" Marks the Mar-Vell! The Blog History of ALL the Captain Marvels, Part 18

"X" MARKS THE MAR-VELL
The largest and most extensive of the realizations of an Alex Ross idea, the "high-water mark," if you will, of these limited-series extrapolations of possible alternate futures of the superhero universe, was undoubtedly Earth X and its follow-ups, Universe X and Paradise X, and a Captain Marvel or two were right in the middle of it. 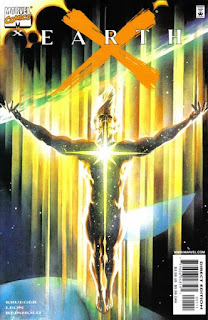 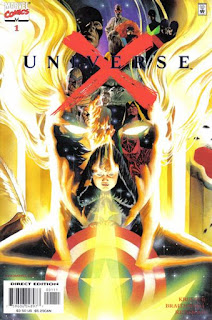 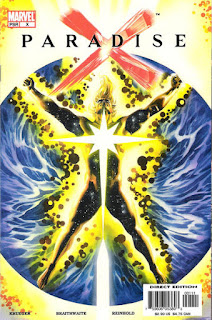 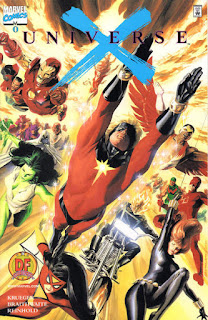 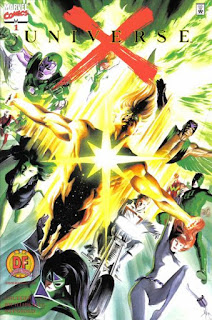 Captain Marvel appears in various forms on selected covers of Earth X, Universe X, and Paradise X.
This Captain Marvel's story was intimately intertwined with death (which may or may not have been ironically deliberate, being as, at this time in the regular Marvel Universe, Mar-Vell was still dead). However, the story was so big and complex and convoluted, with so many characters doing so many bizarre and universe-shattering things and changing in so many ways, told over massive numbers of pages in three 14-issue limited series in a combination of sequential art and prose, that I can't honestly say that I fully understood it the first three times I tried to read it.

Mar-Vell did appear in two distinctive guises: One of them was the dead Kree warrior in the afterlife, leading an army of dead Kree warriors into battle, inspiring them with a speech to convince them that they were actually dead, though their enemy told them otherwise; The other was a 5-year-old child battling the Supreme Intelligence and pining over his late lover, Una. 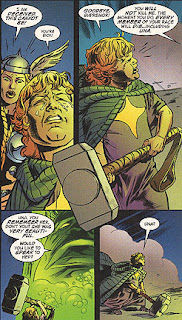 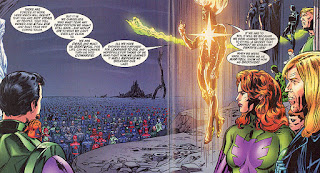 The child and dead versions of Mar-vell in Earth X
Posted by Captain Zorikh at 2:43 AM